We must look to the stars

We must look to the stars 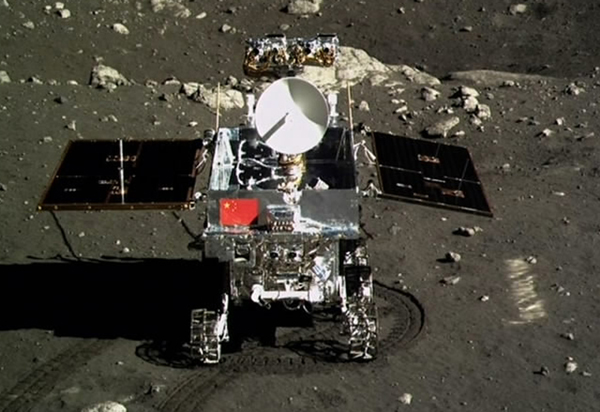 A photo of the Yutu moon rover taken by a camera on the Chang’e-3 moon lander transmitted to the Beijing Aerospace Control Center last December. [XINHUA/NEWSIS]

The government unveiled a meaningful long-term space exploration and development program during a National Space Committee meeting last month. Set to be complete in 2040, the program is far more detailed than previous five-year blueprints.

Some question the efficacy of such long-term plans, which span decades. But consistent focus, support and shared goals are essential in space programs. The government has done right in setting a direction by mapping out a long-term outline for space exploration and development.

The details are as bold and aggressive as the plan’s ambitious timetable. First of all, the government pledged to increase the budget for the space program. It aims to launch space launch vehicles capable of putting a 1.5-ton satellite into space by 2020, joining the global ranks of competitiveness in spaceflight missions.

Specific action plans and areas of concentration for this goal have been laid out. They are daring and proactive, and demonstrate our confidence in our economic and technical capabilities.

The government also drew up strategies to commercialize and industrialize space technology. It aims to entice various industrial sectors to hop on the bandwagon for space exploration and development to create wealth and economic growth for the future.

Despite a slow-moving global economy, governments around the world have been boosting investment in space development, and the industrial market is ever-growing.

Industrial and commercial use of space will only continue to grow. Space technology adds varying dimensions to the economy by creating new and exciting technology. According to a study by the Organization for Economic Cooperation and Development, rocket science and space-borne development directly benefits economic growth by 1.75 times to 3.4 times. Governments that invest in space development see a fourfold indirect benefit.

One day, outer space could become a great economic resource for the people of Earth. With greater participation by the private sector, the speed of commercialization and industrialization of spaceborne technologies has accelerated. Satellites have become necessary for mobile phones, TV channels and tracking services. GPS navigation and mobile digital technologies all rely on space activities and spin-off technologies. Commercial space flights, space tourism and other exploration markets are being experimented with or considered. Korea has decided to climb on the bandwagon at the right time.

Space holds human civilization’s future. The race for supremacy over space started decades ago. Robotic and manned exploration activities on the Moon, Mars and other planets have been numerous. The United Sates aims to launch a human mission to Mars in the 2030s.

In 2010, President Barack Obama said in a speech at the Kennedy Space Center, “By the mid-2030s. I believe we can send humans to orbit Mars and return them safely to Earth. And a landing will follow. And I expect to be around to see it.”

Private company SpaceX is working to launch a Mars mission. China, Japan and India, which have succeeded sending spacecraft to orbit the Moon, are also targeting Mars as their next exploration destination.

Korea has mostly spent the last 25 years developing an indigenous space rocket. It rapidly accumulated technologies to launch and operate artificial satellite systems. However, it still lags in developing rocket engines and satellite payloads. Countries that are advanced in space development like the United States, Russia, Europe, Japan, China and India invest more than $1 billion a year in their space programs. Their expenditures as compared to their total gross domestic products exceeds 0.04 percent. Korea’s annual spending stops at $300 million, which is only 0.017 percent of its GDP. The number of people working in space-related fields in advanced countries are 10,000 or more. But there are just 2,000 Koreans in the space field. We cannot catch up with advanced countries’ space programs with our current budget, technology and manpower - and our past mindset.

The government’s new vision for a space program could be the beginning of our real dreams about outer space. Now that the government has set its goals on space development, they must be matched with endeavors from scientists and engineers. We may have started late, but if we put in our traditional strength of speed, passion, focus and perseverance, space may soon come within our reach.

*The author is a fellow of the Korea Aerospace Research Institute and former head of the Naro Satellite Launch Project.