Davichi both happy being different

Davichi both happy being different 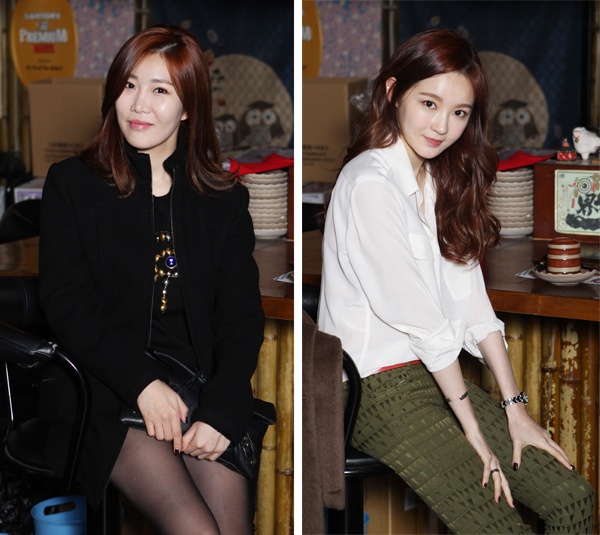 Female pop duo Davichi had a very special year in 2013, singing “Don’t You Know” for the soundtrack of the KBS drama “Iris 2” in February and releasing six more songs throughout the year.

As Davichi kept putting out new music, fans started to appreciate the duo more, leading to the group appearing on more music shows such as the KBS program “Immortal Song.”

The two say they work together in perfect harmony, even though many members of the public seem to think they are not really so close.

They recently sat down with Ilgan Sports, an affiliate of the Korea JoongAng Daily, to talk about their careers.

Q. Have you been asked a lot about why people think you don’t get along?

A. Hae-ri: We get that a lot. And I see why people would say that. It’s not like we link arms together when we’re walking around TV studios or pretend to be all cutesy in front of others. But in real life we meet often, even on the days we aren’t working, and take trips together. Our personalities are completely different, but we felt good about each other from the beginning.

Min-kyung: I think we wouldn’t get that so much if we went on entertainment shows more often. We mostly just go on stage, perform and then come down, so I think that’s where all the misunderstandings started.

So you two have taken trips together?

Hae-ri: Yes, we don’t accompany our manager and just go overseas. We went to Japan earlier. And I was amazed by her strength because I felt like I was going to die after she dragged me to so many places, starting at sunrise each day, and only letting me sleep for two hours a night.

Min-kyung: Why would someone sleep when they are on a trip?

Hae-ri, don’t you get jealous of all the attention that Min-kyung gets from men?

Hae-ri: When we perform at an event, all the men only shout out her name. At first I didn’t know what to do, but now I feel okay. It is natural that men respond to a pretty girl like Min-kyung.

Min-kyung: Women like Hae-ri better. And especially recently, as she has become much prettier, many compliment her. She is having her heyday lately.

Why did you say that you didn’t have a fan club when you topped the MBC music program “Music Core”?

Hae-ri: To win the top position on a music program on a terrestrial channel, one needs to have a lot of votes. If you don’t have a fan club, you’re at a major disadvantage. We have many fan communities supporting us but no official one. We meant to say thank you to our fans because we made it to the top despite the fact we don’t have a fan club.

The KBS show “Immortal Song” features singers reinterpreting classic songs. What was your experience like?

Min-kyung: I said I couldn’t do it because I was scared. I was so used to sharing parts with Hae-ri, I felt burdened to sing an entire song by myself. However, after I came on to the show, I became more confident and I got better at singing. My career is divided into before and after the show.

What does it feel like to turn 30 this year?

Hae-ri: I have mixed feelings. I’m very happy about it and then the next minute I feel blue.

What are the things you want to do more in the future?

Min-kyung: I want to do more songs that are calm because people think we are all about the high notes. I like “Be Warmed” among the songs we did this year because it was different from the style we usually stick to.

Hae-ri: I think the same way. I want to relax. Of course, we can’t only do things we want to, but we want to polish our ability as musicians and explore the types of music we want to do step by step.