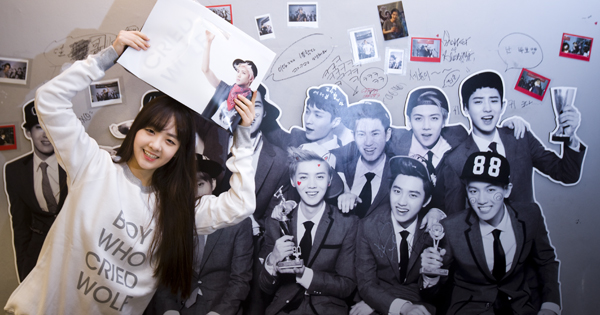 Fandom has come a long way. There was a time when fans were happy to have a few photos and posters of their favorite stars.

But today fans want so much more. Fan clubs collect money and donate it to charitable organizations in the name of their stars. Or they send snack trucks to locations where the stars are shooting TV dramas or music videos - even in the middle of the night - to make sure their favorite oppa, or “older brother,” and the whole crew have enough to eat.

Fans will go to any length to support and stay close to their favorite idols, and the stars’ management agencies have taken note of that demand.

Targeting these avid fans, major entertainment agencies like SM Entertainment and YG Entertainment have started selling more and more goodies. T-shirts, snapback hats, bags and stationery bearing the logos of the groups are the most basic items. But there is even a hamburger named after the boy group Exo at the BWCW store in Garosugil, Sinsa-dong, southern Seoul.

The pop-up store, run by SM Entertainment, launched in August. Despite Exo being a rookie boy band, the store earned 2 billion won ($1.9 million) in sales in its first four months.

Then again, Exo is no normal rookie group as “XOXO (Kiss & Hug)” just topped the one-million-sales mark last month, the first Korean album to sell so many copies in more than a decade.

But the cosy atmosphere of the BWCW store also plays a part in its sales. Doodles of the group’s members cover the walls, along with their personal Polaroid photos. Fans are able to drop their handwritten letters in lockers for each member. 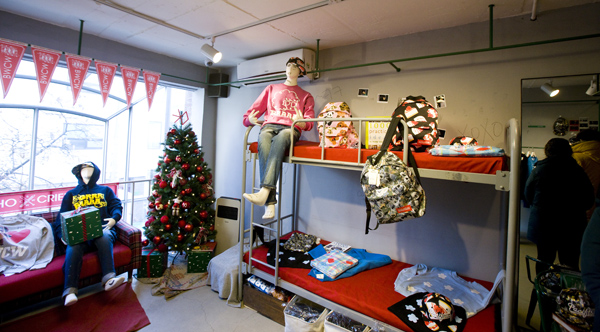 The variety of things you can buy is dizzying. In collaboration with six young Korean designer brands, the BWCW store offers hundreds of Exo goods, from postcards to shopping bags to sweatshirts. There are even Exo-branded scented candles.

SM Entertainment was the first music company to see this trend, beginning with a pop-up store for Girls’ Generation earlier in 2013 after the girl group’s album “I Got a Boy” was released in January. The company raked in 630 million won in just 12 days with that pop-up store.

SM eventually added four more stores this year, including the one in Garosugil, and overall sales are five times larger than last year.

“The options are quite diverse,” said Ahn Kyung-hee, an SM Entertainment employee working for the company’s fashion business team. “There are obvious fan goods bearing the name of Exo to less noticeable products, such as sweatshirts that have Exo-related symbols. Those symbols are inspired by the stage outfits of the group so that fans can keep it secret that they are fans of Exo.”

Shin Ra-young, 17, who visited the Exo pop-up store recently, came all the way from Namyangju, Gyeonggi, during her winter vacation. “It’s a lot of fun just looking around the store itself,” Shin said.

SM Entertainment’s Everysing is the company’s branded karaoke franchise and another outlet where fans can purchase goods.

“Our initial goal was to create a place where fans could come, have fun and purchase souvenirs,” said Kim Mi-kyung, the head of SM’s Everysing team.

Because SM doesn’t run an online store for all these goods and most of the items are available only for a limited time, some bloggers have created a business purchasing goods by proxy for those who cannot make it to the store then charging a 1,000 won commission per item. And once an item sells out, often its price in second-hand online markets climbs. 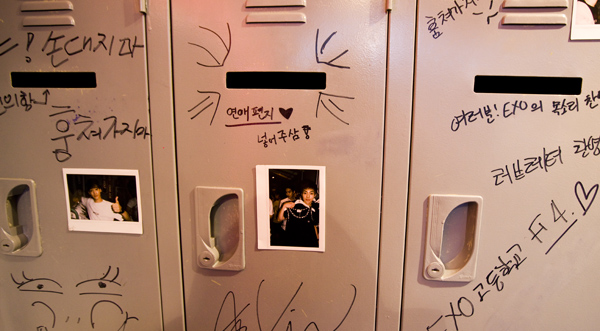 Lockers at the BWCW store allow fans to drop off their handwritten letters to their favorite singers.

“The nature of celebrity merchandising is different from other commodities,” said Kim. “Fans buy these goods because they want to possess them for a long time. That’s why the goods should be diverse and high quality at the same time.

“Our goal is producing numerous high-quality products so that fans are able to decorate their entire rooms with these goods. We are also planning to produce linens, quilts and even underwear in the near future.”

For another K-pop leader, YG Entertainment - home of artists like Big Bang, 2NE1 and Psy - its merchandise is available through its online store, YG e-Shop, as well as on eBay and a Chinese online store.

“The total sales from Korean and Chinese merchandise on our online shops were around 6 billion won just last year,” said Yu Hae-min, the YG official responsible for developing projects.

About 180 items are available from YG e-Shop, with 100 of them related to the group Big Bang. They include chic snapback hats bearing logos of popular songs by G-Dragon and Taeyang, members of Big Bang, and a zany-looking stuffed YG bear, a collaboration produced with toy company Aurora World.

Light sticks are probably the most popular item at YG e-Shop, but prices vary depending on each artist. For example, the official light stick for Big Bang costs 18,000 won and has a yellow crown on top of it, while a light stick for 2NE1, bearing a white heart and angel wings, costs 15,000 won. Solo singer Gummy’s light stick, shaped like the letter G, costs 6,000 won.

“Fans buy this merchandise because they want it to last,” said Yu. “So we try to add more features to the goods by artists with large fan bases.”

YG founder Yang Hyun-suk and other YG producers will design the clothes for the brand.

As with much of K-pop, success with merchandising in Japan is an important business concern. 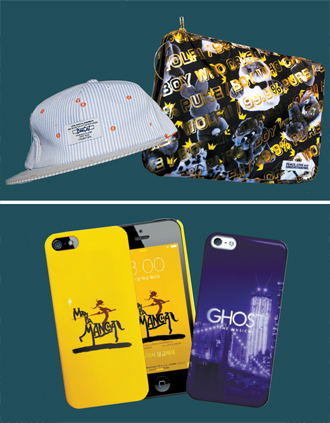 “We can’t track sales in Japan exactly, but sales there are equal to those in the Korean market,” added Yu.

The Avex Group is YG’s local partner in the Japanese market and responsible for its merchandising, with YG receiving royalties.

But merchandising continues to grow in importance for the global music industry. International sales by Bravado, Universal Music Group’s merchandising company, rose 20 percent in 2013, reaching $35 million in sales across the globe last year.

“Along with classical T-shirts, smartphone cases are selling well,” said an official at Universal Music Korea. “Smartphone cases account for one-fifth of our total sales.”

Just searching for “Exo goods” on Korea’s most popular search engine Naver turns up about 300 blogs selling such unofficial goods.

“Fans of all ages, from elementary school students to college students, make goods as a hobby,” said a 17-year-old blogger named Kim, who only wanted to use her family name.

That unofficial fan-produced merchandise mostly consists of simple goods like calendars, notebooks, sticky notes and wrapping paper. But the quality varies widely. Some fan-made goods are basic and handmade, while others are more serious, professionally produced by manufacturers.

They use photos of the stars distributed by the entertainment agencies and usually refrain from just copying designs.

Fan-made merchandise exists in a bit of a legal and moral limbo. Re-selling those items is considered against the rules of the fan community and even distributing goods for free without consent is technically illegal. But most music companies are cautious about going after their stars’ fans.

“We see it as part of fandom culture,” said SM Entertainment’s Kim. “So we collect ideas from fans and plan to reflect them in our future products.”