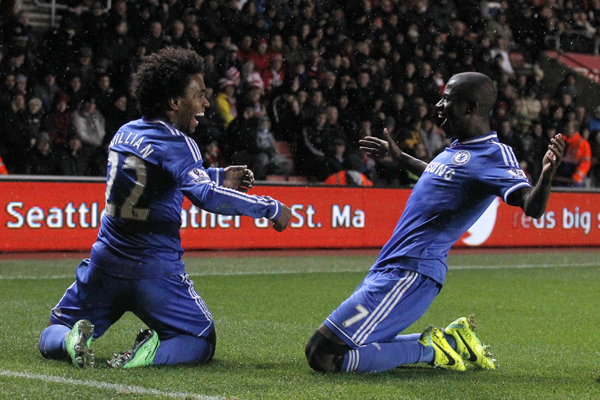 Late goals from Nicklas Bendtner and Theo Walcott spared Arsenal’s blushes and kept them on top of the Premier League in a 2-0 victory over Cardiff City as title rivals Manchester City and Chelsea also won on Wednesday.

The end of the congested festive schedule saw a tired display by the Londoners, who looked set to draw a blank for the second straight home game before Bendtner scored in the 88th minute and Walcott wrapped up the points in stoppage time.

Manchester United’s difficulties returned as the champions were beaten, 2-1, by Tottenham Hotspur at Old Trafford, their sixth league defeat and fourth at home in a stuttering season.

Their rivals, Manchester City, briefly went to the top of the table after subduing a battling Swansea City, 3-2, away while Chelsea beat Southampton, 3-0, on the road and Liverpool won, 2-0, at home over Hull City.

Arsenal, with 45 points in 20 games, stayed one point clear of Manchester City and two ahead of Chelsea in third with Liverpool a further four points off the pace.

Everton’s Leighton Baines converted an added time penalty to rescue a 1-1 draw at Stoke City as the Merseysiders dropped to fifth, while 10-man Newcastle United stumbled to a 1-0 defeat at West Bromwich Albion.

The Spurs, who took a 2-0 lead with goals from Emmanuel Adebayor and Christian Eriksen before Danny Welbeck pulled one back for United, moved above their opponents into sixth. David Moyes’s United team is now 11 points adrift of the leaders.

After Arsenal’s last home game ended in a scoreless draw against Chelsea, the fans were fearing another shutout at The Emirates that would have shunted them off the top spot.

“I think we were mature, intelligent and resilient,” Arsenal boss Arsene Wenger said. “We want to make this place a fortress and take the points no matter what the others do.”

The result kept Manchester City at bay after they showed their title credentials with a fifth consecutive league win.

If Chelsea’s strikers have been struggling, Liverpool has one who can’t stop finding the back of the net.

Luis Suarez made the game safe against Hull with a stunning free kick into the top corner for his 15th goal in seven home games this season. It was the seventh successive match at Anfield that the 20-goal Uruguay striker had found the net.

A Daniel Agger header had put Liverpool on their way to victory after back-to-back away defeats by Manchester City and Chelsea over the Christmas period.

Manchester United came into their clash with Tottenham having won six games in a row, but any optimism generated by that revival drained away as their home form again let them down.