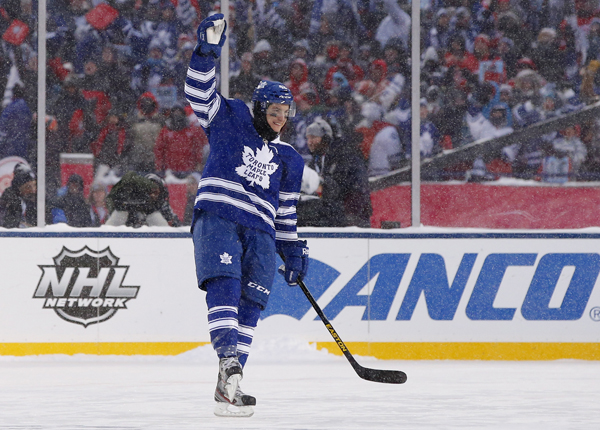 The National Hockey League rang in 2014 in record-breaking style and a shootout thriller as the Toronto Maple Leafs beat the Detroit Red Wings, 3-2, in the outdoor Winter Classic on Wednesday.

An announced record hockey crowd of 105,491 braved brutal Arctic conditions to fill the massive Michigan Stadium in Ann Arbor and were left on the edge of their frozen seats until the Leafs’ Tyler Bozak scored the decisive shootout goal in the fading light and blowing snow.

If confirmed, the crowd would be the biggest ever for a hockey game, surpassing the 104,173 set when Michigan State and Michigan met in 2010 at the same stadium dubbed “The Big House.”

Guinness world record officials were on hand but were not immediately able to confirm the record.

The previous highest NHL attendance came at the first Winter Classic in 2008 in snowy Buffalo, when the Sabres and Pittsburgh Penguins faced off in front of a crowd of 71,217 at Ralph Wilson Stadium.

“We know we sold 105,000 plus tickets and we also suspect there were some no-shows because we heard stories of people taking more than two and a half hours to get here because of the road conditions,” NHL commissioner Gary Bettman said. “It was 13 degrees with a wind chill of minus 1, so I don’t know if we set the Guinness attendance record but we set our own record.”

The sixth Winter Classic was played in a blizzard as snow swirled around the stadium and temperatures plunged to minus 13 degrees Celsius (8.6 Fahrenheit).

Play was halted several times to clear the ice while two Zambonis were used during the entire intermissions, unable to clean the surface fast enough before snow reappeared.

The bitter cold, however, could not spoil the party atmosphere, the snow only adding to the romantic imagery that has been a big part of the outdoor game’s huge appeal.

This year’s Classic was the main event in the weeklong hockey extravaganza that featured alumni games, junior and minor-league hockey games played in Detroit at Comerica Park, home of Major League Baseball’s Tigers, pouring an estimated $60 million into the bankrupt city and another $15 million into Ann Arbor’s economy.

While the Winter Classic was more about the event than the game for many fans, for the two struggling teams the game was more than an outdoor spectacle with two valuable points on offer.

The Original Six rivals came into the contest sitting on 45 points in the Eastern Conference standings looking to tighten their grip on a playoff position.