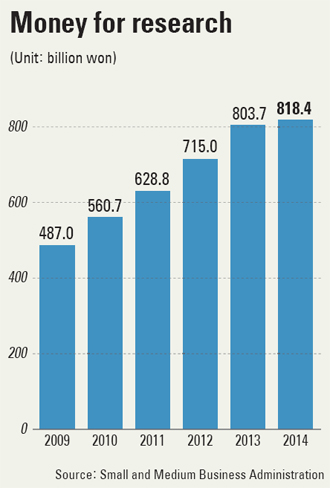 Small and midsize companies in Korea will be given more funding support by the government for their research and development this year.

According to the Small and Medium Business Administration yesterday, the government will spend 818.4 billion won ($779 million) in 2014 in the R&D sector for SMEs, up 1.8 percent, or 14.7 billion, compared to the previous year.

The move is in line with the current administration’s focus on boosting a so-called creative economy and realizing “economic democratization” by nurturing SMEs.

Not all SMEs, however, will benefit from the extended funding this year. The SMBA has categorized SMEs into different groups based on their performances and companies in each category are expected to receive different amounts of support after deliberation by the government.

Among the different categories, SMEs in an “innovation” group, which have been certified by the government for work in promoting innovative businesses, will receive the largest amount of support. They will receive 247 billion won out of the total 818.4 billion won.

There were around 17,000 SMEs in the innovation group as of the end of last year. They are identified each month by the government based on OECD guidelines for collecting and interpreting innovation data. SMEs in the group will be offered government funding and mentoring services.

“We thought that helping smaller companies with their R&D is the best way to have them develop products of higher quality and generate higher profits,” said an official at the SMBA.

By industry sector, companies in manufacturing get about 60 percent of the total government funding for R&D, the official said.

“We’re hoping that companies in various industries receive benefits from our funding support,” he said. “We plan to also assist SMEs in the service sector by delivering know-how on marketing.”

Meanwhile, the SMBA said it will invest in newly established start-ups and university-affiliated research institutes in order to encourage more talented people to start their own businesses.

The administration will spend 141.4 billion won to encourage engineering talents to start their own technology-focused start-ups or work for existing ones. So far, only new businesses with a history of five years or less have been eligible to apply for the funding. But this year, the standard has gone up to seven years.

In a bid to have more start-ups receive funding, the government also lifted regional restrictions for first-time for corporate participants in the program so that companies in any city, small or big, can apply for funding.

It also announced it will expand funding on its “R&D villages,” in which small and mid-sized companies in need of R&D move into a university research institute in their regions.

“The project launched last year,” the official said. “Not only does it help foster technologies and talents from universities, but also it enables companies communicate with each other and exchange business skills.”

For students interested in tech research, the SMBA will fund patent holder institutes and universities to commercialize technologies and guide them through the process of founding a start-up in cooperation with the Korean Intellectual Property Office.

The SMBA will also establish a new R&D program exclusively for engineering students in undergraduate and graduate schools to supply them with entrepreneurship skills and eventually encourage them to found start-ups.

Small businesses of fewer than five employees will be able to apply for funding to modernize their facilities.