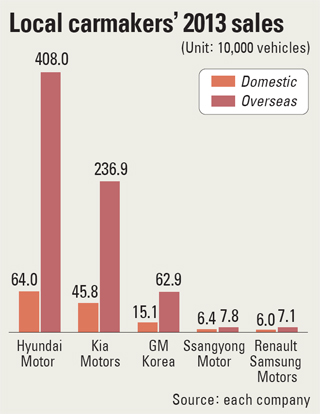 Hyundai Motor and Kia Motors were the only two automakers that saw declines in domestic sales in 2013, although their overall sales grew thanks to a solid year overseas.

But their combined domestic sales were only 1.37 million units, which was a 2.1 percent decline.

This domestic sales decline was due to Korea’s top two automakers, Hyundai and Kia, which account for nearly 80 percent of local automobile sales.

Ssangyong Motor, now owned by India’s Mahindra, hit the jackpot with 34.1 percent year-on-year growth in domestic sales to 63,970 units. With a sales increase of 10 percent overseas to 78,740 units (excluding complete knockdown sales), Ssangyong was the only local automaker to see growth both domestically and overseas with overall sales reaching 142,710 units - a 19.6 percent year-on-year increase.

Despite their domestic sales slumps, Hyundai and Kia had overall sales growths, thanks to solid sales overseas. Hyundai sold 4.08 million vehicles outside Korea, which was 9.3 percent more than in 2012, and Kia sold 2.36 million vehicles overseas, up 5.8 percent from a year earlier.

Because of strikes and weekend work disputes, Hyundai said its shipments from Korea declined by 5.4 percent, but production in overseas plants increased 16.5 percent to more than fill the void. Kia’s overseas production also increased 8.7 percent.

Hyundai Motor Group said that last year was the first time the combined overseas production of Hyundai and Kia surpassed 4 million units, and it plans to increase the foreign production volume to maintain growth.

“In 2014, the competition between companies will be fierce because Japanese automakers will be aggressive with the weakened yen, while the United States’ tapering of quantitative easing could slow down the growth of the global automobile industry,” the company said in a release.

For this year, the world’s fifth-largest automotive group set a conservative annual sales target of 7.86 million vehicles worldwide, up 3.9 percent from 2013. Hyundai is aiming for 4.9 million units, while Kia hopes to sell 2.96 million units globally.

The growth target of 3.9 percent is far below what the automaker achieved last year (6.1 percent) and is a 0.2 percentage point down from an estimate by the Korea Automotive Research Institute. Hyundai Motor Group said that its sales target is in line with what Chairman Chung Mong-koo emphasized in his New Year’s message, which is to focus on reinforcing internal stability while strengthening new technology development.

Industry insiders said it will be tougher for local automakers to make a solid sales growth on their home turf due to rising competition from foreign auto brands.

Although December sales data wasn’t announced, the Korea Automobile Importers and Distributors Association expects that 2013 sales of imports will reach 155,000 units, a nearly 20 percent increase from 2012, and this year’s sales will be 174,000 units.

What’s concerning local automakers is that imported cars are gaining price competitiveness due to tax reductions, while the release of small cars is attracting young customers.

Under the Korea-U.S. Free Trade Agreement, a special consumption tax on cars with engine displacements of 2,000 cc or higher will be lowered from 7 percent to 6 percent beginning this month.

European brands, which dominate the import market, will get an additional boost as a 1.6 percent tariff on cars with engine displacements over 1,500 cc will vanish from July under the Korea-European Union FTA.

Foreign brands have already announced that they have lowered the retail prices of some models, and some have pledged to cut their after-sale service prices.