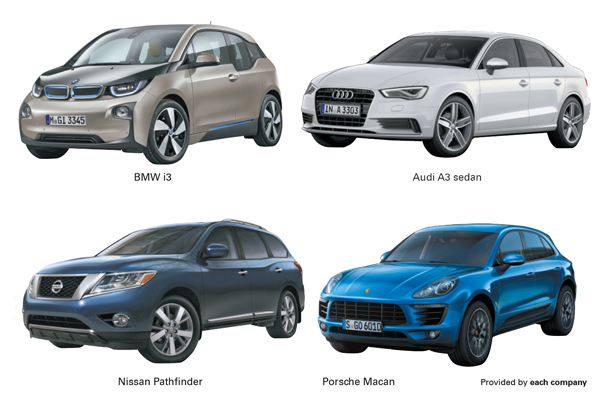 Clockwise from left: BMW i3, Audi A3 sedan, Porsche Macan and Nissan Pathfinder

There is nothing more eye catching in the automobile industry than the release of a new model. As 2014 is the Year of the Blue Horse in the Chinese zodiac, automakers are getting ready to introduce some new models that they hope will perform like stallions.

Industry insiders say the war between domestic automakers and imported car brands will intensify this year. While imported brands are determined to maintain their speedy growth in sales by focusing on the compact car segment, Korean automakers are planning to defend themselves against the foreign invasion by releasing upgraded version of some of their standby models.

The opening shot will come from Audi on Monday. Audi Korea said that it will introduce a new A3 sedan equipped with a 2.0 TDI engine. The company hopes its new compact sedan, which has a 16.7 kilometer (10.9 mile) per liter fuel efficiency, will rev up the small car market.

Following Audi, Nissan is scheduled to release the 7-seat sport utility vehicle Pathfinder on Tuesday. The Japanese automaker expects that the fourth-generation Pathfinder will be popular following the growing fad for camping and other outdoor activities in Korea.

Although its exact release date has not been confirmed, Mercedes-Benz is going to unveil a small CLA coupe in January. The German automaker is also planning to release the small SUV GLA this year.

The Infiniti Q50, which is the next-generation sport sedan of the G37, and Jaguar’s XJR, a performance upgraded version of the large XJ sedan, are also coming to showrooms in the first quarter.

In the second quarter, BMW will release its 2 Series, which is the coupe version of its 1 Series, while its small affiliate Mini is set to unveil the third-generation Mini Cooper.

To maintain the popularity of its seventh-generation Golf, Volkswagen is going to supply a high performance version of the hatchback in the second quarter, such as the Golf GTI and Golf GTD.

German brand Porsche is also joining the small car trend. Following the establishment of Porsche Korea, the company is putting its chips on the small SUV Macan that is expected to hit the market around May. French auto brand Peugeot is also releasing a small crossover, the 2008, in the second quarter, heating up the compact SUV market.

In the second half, Lexus will bring in the LF-NX, a crossover utility vehicle, and the RC coupe, while Ford is going to import a sixth-generation Mustang and its luxury brand, Lincoln, will offer the small SUV MKC. Chrysler is offering its premium SUV Cherokee along with the midsize 200C sedan. BMW is introducing a newly designed X6 SUV.

BMW will be the first foreign carmaker to bring its full electric vehicle to Korea when it introduces the i3 in late April. The company is also unveiling the plug-in hybrid i8 in September. The i3 is expected to compete with local EVs like Kia’s Ray EV, GM Korea’s Spark EV and RSM’s SM3 ZE.

Other premium brands will beef up their hybrid lineups. Mercedes-Benz is planning to roll out a hybrid version of its S-Class models in the second half, while Land Rover is adding a diesel hybrid for the Range Rover and Range Rover Sport.

Ford is introducing a hybrid version of its midsize Fusion sedan in the first half, while Lincoln is importing the MKZ Hybrid. Lexus will introduce a partially redesigned CT 200h in the first quarter.

For Korean automakers, Hyundai Motor’s LF Sonata is probably the most-anticipated model. The latest edition of Hyundai’s iconic midsize sedan is expected to be unveiled at the New York Auto Show in April. The LF Sonata is a fully changed YF Sonata, which was introduced in 2009.

Kia Motors is releasing a new Carnival, which hasn’t come out with a fully changed edition since 2006. The minivan is currently the only model in Kia that hasn’t been designed under chief design officer Peter Schreyer.

The new Carnival is expected to compete against Ssangyong Motor’s Korando Turismo along with foreign models like Toyota’s Sienna and Honda’s Odyssey. Meanwhile, Chrysler is releasing its Grand Voyager and Citroen is unveiling a 7-seat C4 Picasso in the first quarter.

In the second half, Kia is offering a fully changed Sorento SUV for the first time since 2008 and partially redesigned small cars like the New Pride and New Morning. Hyundai is expected to unveil a face-lifted version of the Genesis Coupe.

Other than Hyundai and Kia, other local automakers haven’t planned any eye-catching new models.