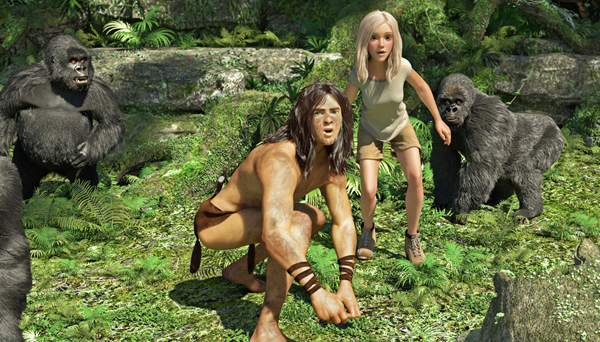 The world has fallen in love with Tarzan many times but never before in 3-D. So what better time than now - or so thought Constantin Films - to revisit the classic introduced by Edgar Rice Burroughs some 100 years ago? On paper it sounds promising enough, and in the minds of viewers, too, eagerly anticipating a sort of virtual-reality tour of the wild with the iconic jungle hero swinging from the vines here and there, almost grazing your face.

But be warned: The German-French-Hollywood collaboration directed by Reinhard Klooss and produced by the company behind the “Resident Evil” franchise plays out more like a hybrid of video games and documentaries, without any of the addicting properties or empathy usually associated with the two forms.

Despite the studio’s claim that it used motion capture technology (a process of recording real actors as the basis for CGI), the film is a far cry from masterpieces like “The Lord of the Rings” and “Avatar,” which used the same method.

Even with the three-year production time, more than 350 hands that worked on the project and 5,000 story boards that went into the movie’s development, the 94-minute feature makes you wonder if it’s the worst or the weirdest adaptation of one of the world’s most-loved tales.

The story unfolds in Africa as John and Alice Greystoke of Greystoke Energies and their 4-year-old son JJ pack up their camp after trying to find a meteor for some time.

Running parallel to the human tale, a drama unfolds in the animal kingdom as a mother gorilla loses her mate and baby when a new male claims the alpha-male title.

Then back again to the humans, and it isn’t long before JJ is left an orphan after a helicopter crash. Cue the bereaved ape who finds JJ among the rubble and takes him in.

Years pass and JJ becomes a cherished member of the ape clan, and the plot unravels in a predictable way. JJ becomes Tarzan, and we get the sense that he’s more ape than human.

That is until Jane, the daughter of an explorer and tour guide, comes to visit her dad. After a few close calls with nature, Jane ends up in the muscular arms of the human boy raised by the chimps.

The film comes with a narration that gives the animation a documentary feel; and with the emphasis on gorillas for the first half of the movie, the film plays out like a Discovery Channel special that makes its human and animal characters equally hard to relate to. The characters are some of the flattest depictions in animation as of late.

Despite recruiting Twilight hottie Kellan Lutz to voice the lead, the dialogue between Tarzan and Jane is painfully bad.

While the 3-D take of the African forest with all its wonders of nature and danger is intriguing, it’s not enough to save the film from the whiplash of a sloppy script and story development.

The dialogue between the two lovers often puts a damper on what could have been touching moments. “Please, don’t let me go,” begs Jane as she dangles from a cliff (for the second time).

Apart from the two lovers, there are more cardboard characters. The villain Clayton, CEO of Greystoke Energies, will make you laugh as he plays out his formulaic evil role and tries to eliminate Tarzan.

The film is watchable in the sense that it’s the first 3-D depiction of a story that’s been remade close to a hundred times, and if there is a lesson to be learned from the revision, it’s that you should leave classics well alone.