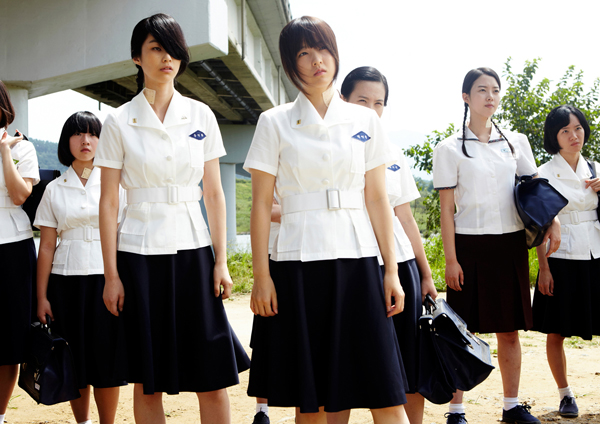 A scene from “Hot Blooded Youth,” which depicts the life and love of teenagers from 1982. Provided by Lotte Entertainment

Following in the stead of retro dramas and movies from last year, “Hot Blooded Youth,” starring Park Bo-young, Lee Jong-suk and Kwon Hae-hyo, will no doubt appeal to the young and old alike with its nostalgic depiction of life and love of teenagers from 1982.

According to director Lee Yeon-woo, who was a student at the time, 1982 was a big year for students as the Ministry of Education eliminated uniforms from middle school and high school students across the country. Although in 1986, uniforms were again implemented in consideration of students from lower socioeconomic demographic, for the most part, 1982 went down as the beginning of freedom for the 45-year-old director, who was in his teens.

At a press junket on Monday, Lee and the stars of the film talked about bringing back the 1980s with a punch.

Lee said the story was the result of reminiscing about this and that, “wondering what happened to that popular guy who got all the girls. I wondered what he would be doing now.”

Lee thought it’d be fun to bring to life the experiences of his youth spent in the countryside of Chungcheong.

In the retro rom-com, Park plays a role like you’ve never seen before. The 23-year-old actress, best known for her good-girl image in the hit film “Werewolf Boy,” will play Young-sook, a tough country girl who makes her classmates tremble, but who has a soft spot for schoolmate and lady’s man Joong-gil, played by heartthrob Lee Jong-suk, who is in hot pursuit of a new girl from Seoul, Soo-hee (played by Lee Se-young).

Park said that the potty-mouthed, hot-tempered party girl character was definitely a role that viewers would be shocked to see her take on, but it would also be far-fetched to call it a “transformation.”

“I do swear from time to time when I’m by myself, so it wasn’t that hard to act out those scenes,” joked Park. But the real killer for her was the dialect.

Although born in North Chungcheong, the young actress said that the southern dialect was still foreign to her, and something she had to ask the director for advice about. 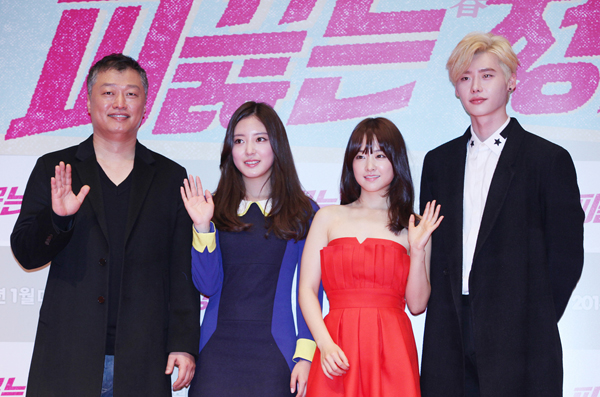 “The accent is somewhere in between a Jeolla and Chungcheong dialect,” said Park, adding that she did have fun swearing in a dialect - “it sounds different than swearing in Seoul dialect.”

Meanwhile, for actor Lee, playing the “Casanova of his high school,” wasn’t all that hard to pick up.

“I did OK on the popularity radar,” said Lee, reflecting on his own high school days.

But there was one scene that did Lee dreaded: one of the highlight moments in which his friend, Kwang-sik, played by model-turned-actor Kim Young-gwang, delivers a blow to his face, all because of Young-sook.

“He had trouble controlling the force of his punches,” said Lee, adding that after the first take, he found himself getting nervous at each retake.

When asked how compatible they were on screen, Lee gave himself and Park a 50 percent rating [apparently they didn’t hit it off as much as Lee hoped for, given they’re just a year apart], while Park gave a generous 80 percent before seeing Lee’s numbers and asking to withdraw hers.

Although the love may be unrequited, the film promises enough to keep you guessing as Park, the tomboy in love, chases after Lee and is chased by Kim.

With supporting cast members like Kwon Hae-hyo (who plays Joong-gil’s father Dae-pan), Ra Mi-ran and Kim Hee-won (who play comical teachers), Park said she felt sure about the film, even if she and her co-stars are taking on characters from an era before they had been born.

And although the new film has some tough contenders in her own filmography, Park said deciding on the film was an easy choice.

“I guess because my two former movies were such big hits, people wonder if I agonized over my next choice. But I never felt burdened about the choices I made,” said Park. “The only time is when I’m on a new film set and about to kick off a project.”