Reshuffle rumors are shot down by the chief of staff

Reshuffle rumors are shot down by the chief of staff 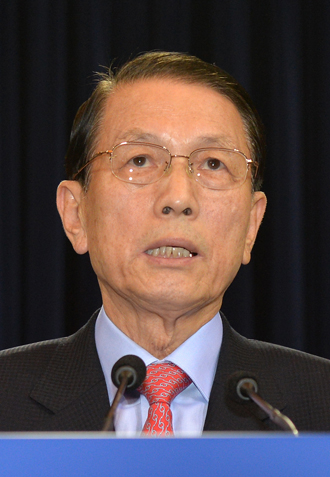 Presidential Chief of Staff Kim Ki-choon held an emergency press briefing yesterday amid speculation that a cabinet reshuffle is imminent to make it clear that President Park Geun-hye is not considering such a move.

“This is a crucial time in which [the president] is reviving the embers of economic recovery, promoting sustainable economic growth and solidly guarding national security under a grave security environment,” Kim said. “The cabinet should join forces to proceed with state affairs without hesitation.”

It is rare for the 75-year-old chief of staff - who is largely described as hermit - to make a public appearance. The former prosecutor-general, who was one of the closest aides to former President Park Chung Hee, President Park’s father, has visited the press room at the Blue House only twice before. The first occasion was when he was appointed on Aug. 5; the second came the following day, where he announced that the president had proposed a meeting with leaders from both the ruling and opposition parties.

Kim’s press briefing is even more exceptional in that it was meant to dispel rumors.

After Kim Haing, the Blue House spokeswoman, abruptly tendered her resignation late on Dec. 31, several media reports speculated that a reshuffle at the presidential office was a likely possibility in the near future. The Park administration needs rejuvenation as it enters its second year, many experts have pointed out.

Kim’s departure has left three secretary-level positions open. Coincidentally, all of those roles were formerly held by women.

The fact that 10 first-level public servants at the Prime Minister’s Office submitted their resignations also fanned talk of a possible reshuffle.

“A cabinet reshuffle is absolutely not being considered at this moment,” he said. “Media reports on that issue itself would rattle the government. There are so many things to be done at the beginning of this year,” the aide added.

He asked press members to refrain from making additional reports on the issue. Already a few figures have been mentioned in news reports as potential candidates for a few ministerial posts. President Park is set to begin her first overseas trip of 2014 in mid-January.