Man’s suicide leads to fight between his family, police

Man’s suicide leads to fight between his family, police 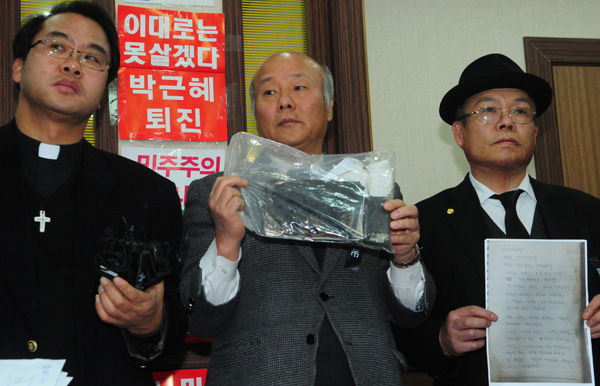 Members of a funeral committee for Lee Nam-jong, who took his own life Tuesday by setting himself on fire, display Lee’s belongings and a copy of a suicide note yesterday at Hallym University Medical Center in western Seoul. [NEWSIS]

A 40-year-old man’s self-immolation on New Year’s Eve on an overpass near Seoul Station has spawned an unexpected quarrel between his bereaved family and the police over what motivated him to take his own life.

On Tuesday, Lee Nam-jong poured flammable liquid over his body at about 5:30 p.m.

Before setting himself ablaze, Lee hung a banner on the overpass that read, “Park Geun-hye out. Launch the special investigation.”

His message referred to demands that have been voiced by opposition lawmakers that an independent counsel investigation be established to look into allegations that the National Intelligence Service interfered in the 2012 presidential election, posting comments online in favor of Park Geun-hye, then the candidate for the ruling Saenuri Party, and disparaging her rival Moon Jae-in.

Lee was taken to a nearby hospital but died from severe burns at 7:55 a.m. on Wednesday. A small notebook containing his suicide notes was found near the site where Lee killed himself.

Lee’s family disclosed those notes yesterday in an effort to disaffirm claims in an interim report by the police that suggested Lee took his own life as a result of financial difficulties.

Lee’s suicide note led with the phrase “Are you okay?”

Since mid-December, variations of this slogan have appeared on posters slapped up at schools across the country. The notes are a throwback to a medium that older generations used before the dawn of the Internet and social media to communicate unhappiness or political discontent.

“President Park pledged to uphold principles,” Lee continued in his suicide note, “but it is she who is not applying principles in governance.”

Lee demanded that the president take responsibility for the alleged meddling in last year’s presidential election by state agencies and the National Intelligence Service.

“It is President Park who must take responsibility for foul play by [these] government agencies, no matter if it was done in a systematic way or by an individual’s deviation … I will burn down all the fear and go away with them. Please rise up.”

The police, however, implied in their interim report that Lee, who worked as a cashier at a convenience store in Gwangju, was under great financial strain, with debts amounting to 30 million won, or about $28,000. They went on to say that these pressures drove him to take his own life.

The police also said that Lee had changed the benefactor on insurance premiums, which he had subscribed to his brother. Authorities claimed that this raised the possibility that Lee committed suicide for financial compensation.

The report by the police prompted protests from Lee’s family, who said the police released the report without consulting them first.

They also suspect that the police tried to prevent the content of Lee’s suicide notes from being divulged to the press.

“Lee did not make any mention of financial distress in his suicide notes,” a funeral committee for Lee - comprised of his family and civic group members - said during a press briefing yesterday at Hallym University Medical Center in Yeongdeungpo District, western Seoul.

An altar for Lee was set up at the medical center.