To get clients, lawyers are now breaking the law

To get clients, lawyers are now breaking the law 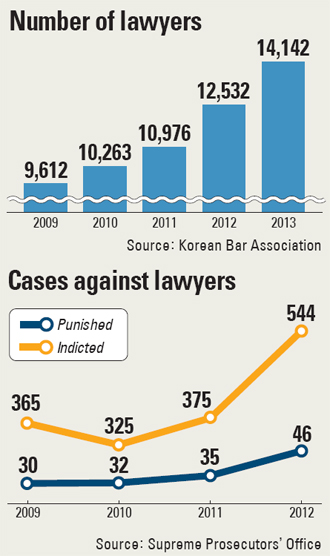 Cut-throat competition is causing lawyers to break the law in desperate attempts to win potential clients, according to the Supreme Prosecutors’ Office.

A 39-year-old identified only by the surname Lee is one lawyer who got on the bad side of the law. The Seoul Central District Prosecutors’ Office reported yesterday that Lee illegally bought personal details from a broker surnamed Park of individuals filing for bankruptcy. Using the information, Lee approached 417 potential clients from last March through October, raking in 560 million won ($533,120) in fees.

The infractions by the lawyers vary and include fraud and taking bribes.

A group of six lawyers were ordered to pay up to 40 million won each in fines by the Suwon District Court last month for having illegally lent their licenses to non-lawyers.

The legal community finds this particularly alarming because the cause is black and white: too many lawyers chasing too few clients.

“A majority of new lawyers are straight out of law schools, and they haven’t worked at a court or a prosecutors’ office or any kind of decent-sized law firm,” said lawyer Kim Kwan-ki.

“As the saturated legal market is not able to absolve all these new lawyers,” he said, “irregularities have increased amid fierce competition.”

According to data by the National Tax Service, of 3,725 lawyers registered as individual practitioners, 640 were found to have earned less than 24 million won a year in 2012, accounting for 17.2 percent of the total.

Some lawyers investigated for the illegal purchase of personal information about potential clients claimed they did nothing wrong, arguing buying such information from brokers is business-as-usual in the legal market.

Legal experts say the authorities should toughen punishments for lawyers who violate the law or the ethical standards of the profession.

Also due to the influx of fresh-out-of-school lawyers, they say specialization should become more common in the legal industry.

“The government should give authority to professional associations to reform themselves in a more active way,” said Na Seung-chul, president of the Seoul Bar Association.

“Lawyers also should realize that times have changed and they need to adapt to a new environment in the industry.”