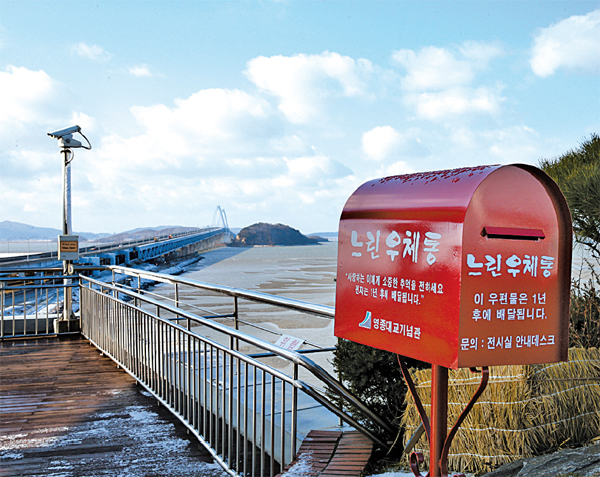 Yeongjong Bridge is home to a Slow Postbox.

An airport is a place of reunions and farewells, so it makes sense that three Slow Postboxes sit on the bridge that takes you to Incheon International Airport.

Kim Chang-geun from the New Airport Highway - the company that built and operates the bridge - said the postboxes were installed specifically for those on their way to the airport.

It took five years for the company to execute the plan, and in 2009 the boxes were installed at the Yeongjong Grand Bridge Exhibition Center.

After you buy postcards from the information desk, there is no additional charge for delivery. You can also post letters that have proper stamps on them.

Because staff are needed to sort the mail to be delivered on the exact date, it cost 20 million won ($19,032) to print, store and deliver 15,000 postcards that go through the postboxes in a given year.

On the upside for the company, those who receive the mail often end up visiting the bridge. Although the site is being remodeled at the moment, the postboxes will reopen in March. (032-560-6114)

Bugak Palgakjeong (Octagonal Pavilion), one of Seoul’s top spots to take in the skyline, installed a Slow Postbox in October 2011. Atop Mount Bugak in Pyeongchang-dong, central Seoul, countless couples on romantic drives find themselves at the postboxes.

To the annoyance of the staff, though, many make calls asking for the return of letters they wrote after breaking up with their significant others. To accommodate for failed relationships, there is now an option to change the address of the receiver, but this is only possible within 200 days of the letter being sent.

Some also choose to write to the deceased because the postbox offers an option to scatter the letters addressed to the departed and untraceable recipients.

In addition, pictures taken with mobile phones can be printed and turned into postcards. Regular postcards for posting can be purchased at the Sky Restaurant, on the second level of the pavilion.

Apart from skiing and snowboarding, writing letters is all the rage at the High1 resort in Jeongseon, Gangwon. It’s a common sight to see snow bunnies take a break from the slopes by scribbling away.

Two Slow Postboxes were installed at the resort’s outlook area in September. Because they are at an elevation of 1,340 meters (4,396 feet) above sea level, each is called “High One 1340 Postbox.”

Since they were installed, more than 5,000 postcards have been snapped up. They’re free, and senders are able to stamp the postcard receipt with the date that they bought it.

Next to the postboxes stand the resort’s mascots, making the site popular for happy snaps. The lookout area is also next to the Mountain Top restaurant. (1588-7789) 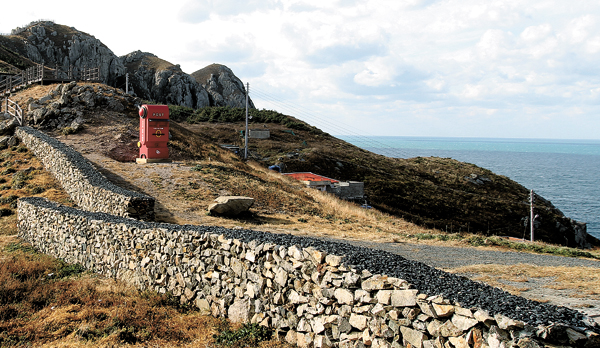 Gageo Island, the southernmost tip of South Korea, is a popular place for tourists to write sentimental letters. By Shin Dong-yeon

Gageo Island in Shinan County, South Jeolla, is the southernmost tip of South Korea. It is best known for catching the last of the nation’s sunsets and, now, also for its Slow Postbox, which was installed in May 2012 as a means for tourists to reflect upon the past year.

The box is called the “Year-end Postbox” and it cost 76 million won to build. But it’s easy to see why. It measures 1.49 meters wide, stands 3.12 meters tall and is made of sturdy metal. This was necessary as the island is prone to strong winds, and to further protect the postbox there are rocks piled up around it.

As Gageo is known for the fork-tailed storm petrels that nest there, the postbox was designed in the birds’ image. In addition to collecting mail, the box is the object of many happy snaps because of its unusual shape.

Go Gyung-nam from the Shinan County Office collects mail everyday and holds it until it is sent. Postcards for the boxes can be picked up at nearby restaurants and lodgings. No stamp is necessary. (061-240-8620) 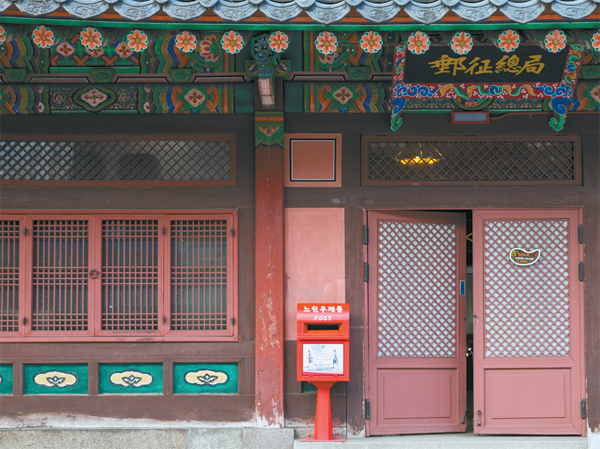 Ujeongchongguk, next to Jogye Temple in Insa-dong, central Seoul, was the first post office in Korea. Established by the royal court in 1884, this is the birthplace of the modern Korean postal service.

After the nation’s independence from Japan, Ujeongchongguk was turned into a museum until August 2012, when it resumed some basic services, including a Slow Postbox.

You can send up to 10 items at a time, although no registered post or parcels are accepted. It’s also a good opportunity to trace the history of the postal service.

“To love is to bring more happiness than being loved. Today, I stand at the post office under the emerald sky to write you a letter,” reads a poem written by renowned poet Yu Chi-hwan.

Along Ibagu road in Choryang-dong in Busan stands “Yu Chi-hwan’s postbox,” located at the memorial erected in May as a tribute to Yoo.

Photographers love this site as you can catch a glimpse of Busan’s harbor, Bukhang Bridge and the shantytown along the mountainside. Postcards cost 270 won, which includes postage.

The postbox named after Yu is on the third level, where the lookout is, while on the first level there is an outdoor performance area that is always open.