Signed, sealed, then delivered in a year

Signed, sealed, then delivered in a year 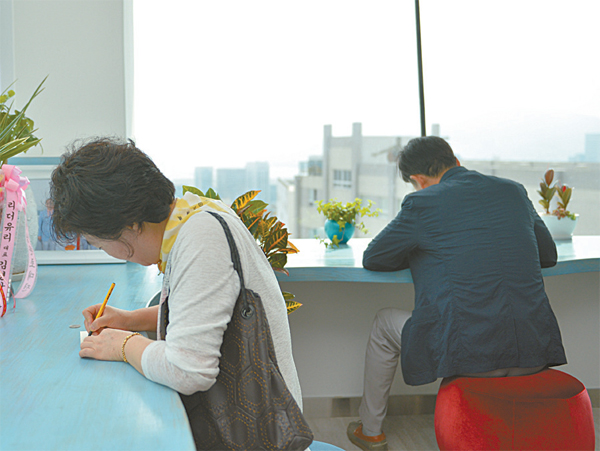 Visitors at the Yu Chi-hwan memorial center in Busan scribble away letters to be delivered a year later.

Gone are the days when romance lived in letters, when a letter was synonymous with love and friendship and waiting for the mail to arrive was half the fun.

Back then, Christmas and birthday cards were a means of testing a person’s popularity.

Now, instead of heartfelt scribbles from dear ones, we have emails, texts and SNS posts flooding our inboxes, but with none of the warmth and joy that snail mail brings.

Especially in Korea, where the digital revolution is in full force, it seems postboxes are slowly dying. According to Korea Post, about 6,000 postboxes have been removed between 2007 - when there were 25,000 of them nationwide - and August.

As a general rule, if a postbox fails to collect any items in a three-month period, it’s removed.

But even with time working against them, there is a different kind of postbox that’s on the rise.

The Slow Postbox is a novel concept that is bucking the trend, allowing the opportunity to send a letter with an estimated delivery date of one year from its dispatch.

Rather than delivering timely news, the point of these letters is to express one’s deepest (and, hopefully, constant) feelings to loved ones. It’s popular for lovers looking toward anniversaries and for those who want to write to themselves as a reminder of the year that has come and gone.

The first of these postboxes appeared on Yeongjong Bridge, the expressway to Incheon International Airport, in May 2009. Since then, they’ve been cropping up everywhere, from libraries and hospitals to highways, ski slopes and landmark sites, including Geoje Island, a five-hour boat ride from Mokpo, South Jeolla.

As the year kicks off, what better time than now for those who like to put pen to paper to jot down a line or two for themselves and their loved ones?