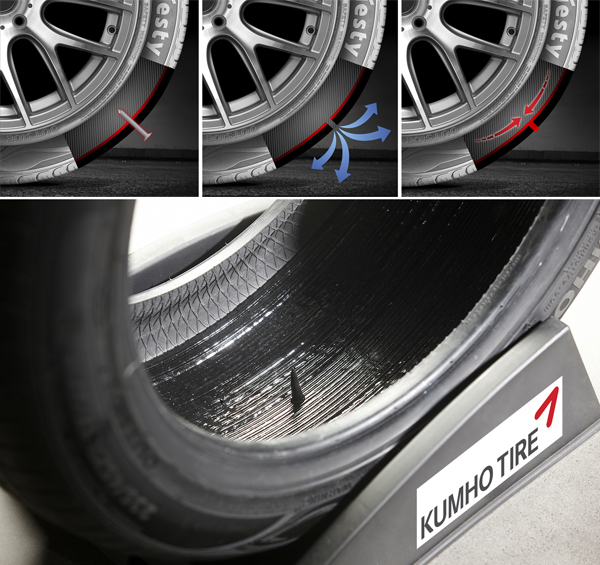 Kumho Tire’s sealant tire self seals with a special jell-type fiber if a sharp object penetrates the tire’s tread, which prevents leaks and allows the driver to operate the vehicle. Kumho is the first Korean company to release such a product. Provided by the company

Kumho Tire, the nation’s second-largest tire manufacturer, said yesterday that it is releasing a “sealant tire,” the first among local companies.

A sealant tire, also known as a self-sealing tire, provides an automatic seal with a special jell-type fiber if a sharp objects penetrates the tire, preventing flat tires.

“This product, which is first introduced in Korea, is born from our latest technology,” said Jung Il-taek, who is in charge of materials development at Kumho. “We will continue to release products that are dedicated to customers’ safety and comfort.”

According to the company, the sealant tire is 10 percent heavier than a normal tire but its braking and handling ability is equal to a normal tire. Although global tire companies such as Continental and Pirelli have already released such products in the market, this is the first Korean company to have done so.

There are two types of tires that continue to operate even after being punctured: run-flat tires and sealant tires.

According to Kumho, run-flat tires need to be replaced shortly after being punctured. But since a sealant tire automatically seals the punctured area, the tire doesn’t have to be changed right away.

Kumho, the world’s 12th-largest tire manufacturer, said its sealant tire is based on its Majesty Solus model and will be released in three sizes on Monday. The price of the sealant tire will be 30 percent more than a normal Majesty Solus tire, it said.

Kumho said sealant tires from other tire manufacturers are already standard on cars like Hyundai’s Equus, Kia’s K9 and Volkswagen’s Passat and CC. The company hopes that its product could gain a share in the replacement tire market and supersede more expensive imported tires.

Kumho has been pushing R&D with the opening of an R&D center in Yongin, Gyeonggi, in September last year. The company also inked a strategic alliance deal that includes technology exchanges and cross ownership with Japan’s Yokohama Rubber last month.