Satellite sale by KT unit spins out of orbit

Satellite sale by KT unit spins out of orbit 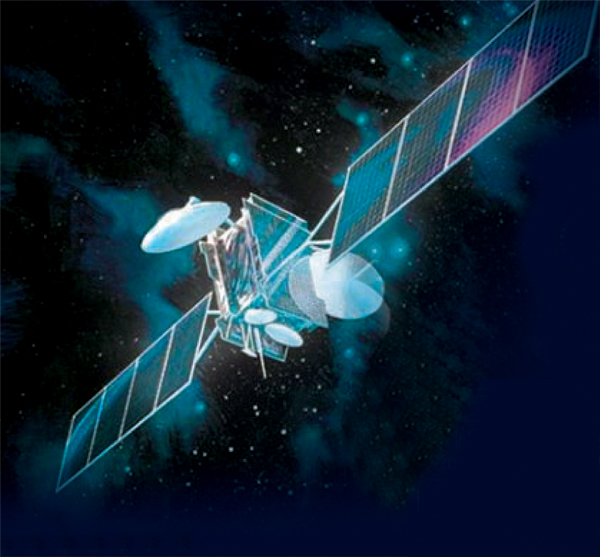 Hong Kong-based satellite operator ABS, which bought the Mugunghwa 3 satellite from KT Sat, an affiliate of KT, said it has gone for international arbitration after the sale turned out to be illegal.

According to the Ministry of Science, ICT and Future Planning, KT Sat offered to buy back the satellite, but ABS rejected its offer.

Analysts familiar with the deal said it may be difficult to hold onto ownership of the satellite’s orbit, which is at a longitude of 116 degrees east, right above the equator.

According to industry sources Thursday, the Science Ministry notified KT Sat that the sale was invalid and canceled parts of the bandwidth assigned to the company for satellite services. The Mugunghwa 2 satellite, which was also sold to ABS, was moved to an orbit, with bandwidth controlled by another country.

KT Sat sold ABS the Mugunghwa 3 satellite without following legal procedures, which was revealed by a parliamentary audit last October. According to the audit, ABS only paid 530 million won ($502,274), which is well below the satellite’s value. 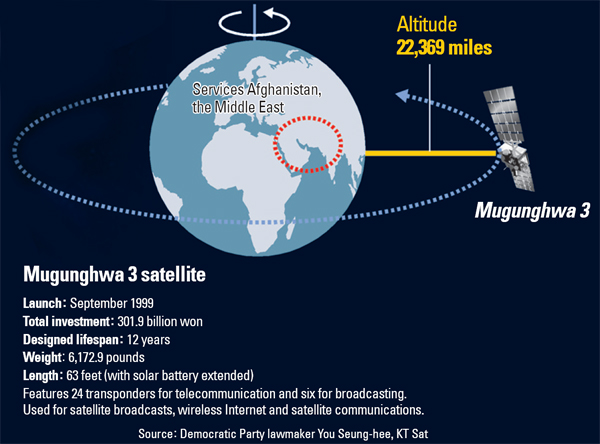 “We sold the satellite without a government permit since it was already older than its designed lifespan,” said an official from KT Sat. “It was not a fire sale. We received more than 20 billion won if you include fees for technological assistance and a control system.”

The Science Ministry cannot nullify the sale, but it can withdraw bandwidth assigned to KT for different uses - and it has.

KT Sat tried to buy back the satellite and regain its canceled bandwidth, but it didn’t meet ABS’s asking price.

ABS is reportedly demanding more than it paid, claiming damages to its public image among its customers. Through the Mugunghwa 3, ABS provides satellite services to the United States Army and North Atlantic Treaty Organization troops stationed in Afghanistan and other Middle East countries, as well as broadcasting services for television stations in Russia.

“ABS will see profits of more than 160 billion won for the rest of the satellite’s life,” said Chung Seon-jong, the former president of the Electronics and Telecommunications Research Institute. 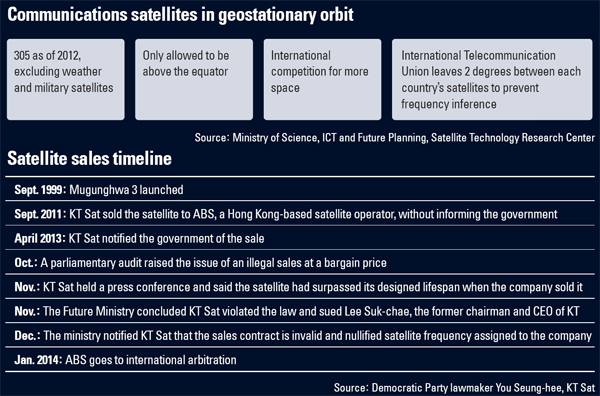 Reportedly, ABS will soon submit the case to an international arbitration commission in New York.

“Trading of any American-made satellites is based on the U.S. International Traffic in Arms Regulations,” said an ABS source based in Korea. “The regulations currently stipulate that ABS owns the Mugunghwa 3 satellite and holds rights to operate it. The arbitration committee is most likely to side on ABS’s favor.”

However, the ABS source said, “When the clients cannot use services through the satellite, ABS is going to be the one that has to provide compensation for any damages.”

Being unable to regain the ownership may also have negative impacts on telecommunications sovereignty.

The Mugunghwa 3 is in orbit at 116 degrees east, right above the equator. This geostationary orbit is one of Korea’s space territories assigned by the International Telecommunication Union (ITU), a group in charge of managing rights for artificial satellites and their frequency bandwidths. Since only limited numbers of satellites are allowed in orbit right above the equator, competition among countries is high to obtain a good spot. The union reclaims any positions that haven’t been used for three years after being registered.

As Mugunghwa 3’s ownership was transferred to ABS, ownership of the satellite and its position in orbit have been split, which the ITU may take issue with.

The Mugunghwa 6 also orbits at 116 degrees east for domestic services, but the Mugunghwa 3 is the only one that provides services overseas.

“A country that has eyes on our orbit may try to take it from us,” said You Seung-hee, a Democratic Party lawmaker. “Unlike territory that’s on land or in waters, space orbits are not legally included in our sovereignty. So, it may be difficult to fight against other countries without a firm legal basis.”

Korea can keep the position if it casts Mugunghwa 3 out of orbit and replaces it with another satellite. However, the launch of a new satellite won’t take place until 2016.

The Future Ministry is reportedly in discussions with the ITU.

“Through the discussions, we will be able to prevent the worst-case scenario in which Korea loses the position. However, it won’t be easy for us to ask the international community for understanding,” a ministry official said.