Will property market come back from the grave?

Will property market come back from the grave?

Hopes for revitalization of the real estate market were raised after an exceptionally high capital gains tax rate on owners of multiple homes was lowered a few hours before the New Year.

On the last day of 2013, the ruling and opposition parties agreed to abolish the regulation, which was considered one of the key depressants of the real estate market, along with the acquisition tax. And that tax is going down, too.

The high tax rate imposed on profits made from selling apartments by multiple homeowners was set between 2003 and 2005 during the Roh Moo-hyun administration when the real estate market was overheating.

The purpose was to prevent multiple-home buyers from making additional purchases for the sole purpose of profiteering, particularly in popular neighborhoods like Gangnam, which was driving prices to astronomical levels.

Real-estate speculation, a revered economic activity in such free-market places as Hong Kong and Singapore, is considered borderline shady in Korea.

Previously, the capital gains tax imposed on sales of real estate varied from 6 percent to 38 percent depending on the amount of profit. If a seller made less than 12 million won ($11,365), the tax rate was 6 percent. If the profit was over 300 million won, the rate was 38 percent.

It didn’t matter how many properties a seller owned.

This quickly froze the market as owners refrained from selling property to avoid heavy taxes.

And when the global financial crisis hit in late 2008, the real estate market ground to a shuddering halt. 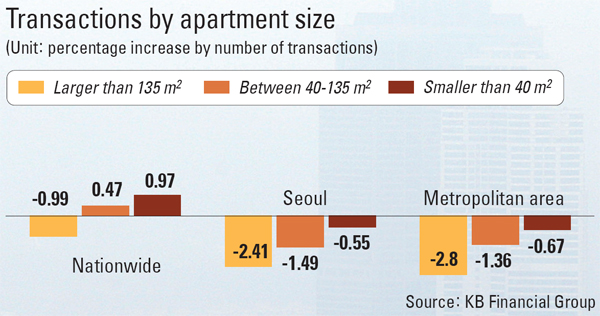 The Lee Myung-bak administration tinkered with regulations to thaw the market but made little progress. The last attempt it made was a temporary lifting of the capital gains tax as well as a lowering of the acquisition tax. But it wasn’t permanent, and market analysts said the exceptionally high taxation was the real problem all along.

With the permanent lowering of the acquisition tax last month and the lifting of the steep capital gains tax on multiple property owners, the market just might respond, analysts say. Although the capital gains tax range has returned to its former 6 percent and 38 percent range, it’s actually been lifted a bit. In the past, the 38 percent rate affected profits over 300 million won. That level has been lowered to 150 million won. This will help the government raise an additional 320 billion won to 470 billion won in taxes.

There’s a capital gains exemption if a seller only owns one property, it’s worth less than 900 million won and has been owned for more than two years.

Additionally, the day after Christmas, the permanent lowering of the acquisition tax came into effect. This is expected to encourage potential buyers who have been waiting since 2008 for real estate to drop further.

“Uncertainty about government policy was one of the causes of the freezing of the real estate market, said Lee Nam-soo, an analyst at Shinhan Bank’s private banking department. “The fact that such uncertainty has been cleared will contribute as a positive factor.”

With taxes lowered, any economic recovery at home and abroad is expected to further boost Korea’s property market.

“As the real estate market is in accord with the global economy, which is closely connected with the capital markets, macroeconomic indicators showing global and domestic economic growth are acting as influential factors,” said Ham Young-jin, head of research at Budongsan 114, a real estate information provider. “Although there are still concerns over low growth that is below the nation’s potential and the gap between indicators and what people feel and the actual economic situation, if the economy improves as many institutions forecast for 2014 it will contribute to recovering purchasing power in the real estate market.”

Although Korea’s Ministry of Finance has the most optimistic projection for the nation’s growth at 3.9 percent, many institutions, including the Bank of Korea, Korea Development Bank, the International Monetary Fund and the Organization for Economic Cooperation and Development, are projecting Korea’s growth at north of 3 percent.

However, not all signs are clear on whether the market will fully recover. One of the biggest obstacles is the continuously rising prices of jeonse, or long-term deposit rentals.

According to a KB Financial Group report on the real estate market last year, housing transaction prices grew 0.37 percent year-on-year. The situation was much worse for the metropolitan area surrounding Seoul, where prices fell 1.37 percent. The housing transaction value fell 1.27 percent during the same period. The overall drop was cushioned by the 2.73 percent increase in five major cities. While the northern part of the Han River saw a 1.5 percent decline, the neighborhoods south of the Han, which is a popular real estate market, also fell 1.05 percent.

This indicated that people were preferring to lease apartments rather than making a purchase, mostly because they hoped apartment prices were going to continue to drop.

Growth in jeonse prices in the popular Gangnam area remained high at 8.56 percent, while in Songpa, another popular place in southeastern Seoul, it was 8.5 percent.

Some analysts doubt that the lower capital gains tax will resurrect transactions. They say the biggest reason owners are not selling is because the value of their properties has remained so low, and, unless it goes up substantially, they won’t put them up for sale.

Other risks for the real estate market is the mass retirement of baby boomers and the joblessness affecting the younger generation. People in those two categories will not have the financial ability to actively engage in real estate purchases.

Meanwhile, other real estate policies that will be applied this year include the government allowing three additional stories to be built on apartments that are 15 years or older. This was meant to boost the real estate market, particularly the remodeling area of it.