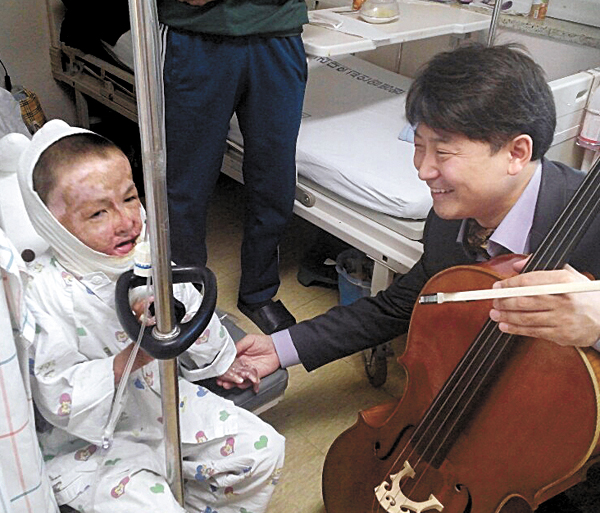 Cellist Sung Seung-han holds the hand of Salidat Baltabay, a Kazakh girl who was being treated for third-degree burns at Korea University Anam Hospital in Anam-dong, northeastern Seoul, on Nov. 12, 2013. Provided by the hospital

The last day of 2012 was a snowy one when Salidat Baltabay went down to the basement of her house in Taraz, southern Kazakhstan, to turn on the boiler to warm the house.

Then 7 years old, Salidat opened the valve of the Russian-style stove and struck a match; but instead of lighting, the boiler exploded and caused a diesel tank beside it to catch fire.

Salidat’s father, Kuanyshbev, 36, rushed to the scene, but the fire was already burning her body.

The hospital was able to save Salidat’s life, but she was covered with terrible third-degree burns all over her face, hands and the upper half of her body.

Before the accident, Salidat had dreamed of becoming a music teacher - she was good at singing in public, and her friends praised her “nightingale-like” voice. But after the accident, she was afraid of being called a monster. She stopped going to school and just stayed at home all the time.

But hope visited Salidat and her father last August. Jung Cheol-woong, a professor of transplantation and vascular surgery at Korea University Anam Hospital, was in Kazakhstan working as a medical volunteer when he heard about Salidat.

Jung bought a plane ticket to Korea for Salidat and her father and started raising money at his church for her surgery.

The young girl needed 10 dangerous operations at Korea University Anam Hospital, to rebuild Salidat’s body, inside and out. Even incubating her for surgery was difficult because of the damage to her neck.

Eventually they separated her chin from her chest and rebuilt her mouth and ears.

“My daughter surviving the accident was miraculous, but we experienced a bigger miracle thanks to those Korean doctors,” said her father through an interpreter.

“We thought we should help, regardless of the religious differences,” said a spokesman for the Seoul church.

The church raised 40 million won through a charity concert that featured cellist Sung Seung-han, a friend of Jung’s. Sung also visited Salidat in November in the hospital and played some music for her, including a Korean children’s song.

“Like her name means, she has a strong will to live,” Sung said. Salidat sounds similar to “salira,” Korean for “shall live.”

“She has a positive personality,” he added.

On Dec. 31, exactly a year after she sustained the grave injuries, Salidat was released from the hospital. When she left, she thanked the doctors and nurses, pointing with her rebuilt fingers to her eyes, nose, mouth and ears. She was smiling.

More healing remains. One of her challenges is to regain the muscles that she lost due to the burns and the surgeries. Salidat and her father will stay in Seoul for further treatment before returning home on Jan. 17.