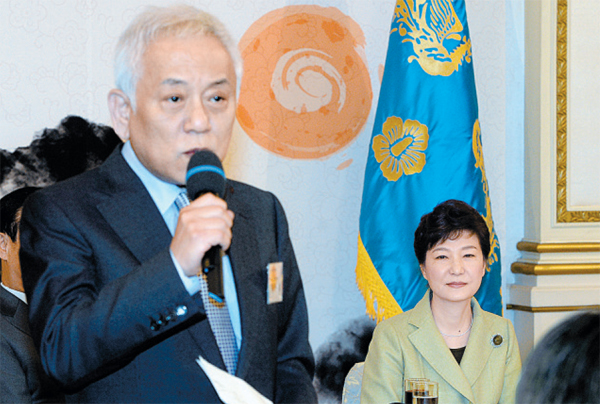 Democratic Party Chairman Kim Han-gill made an appearance at President Park Geun-hye’s New Year’s meeting yesterday, a rare action for an opposition party leader, and called for “communication” between the president and the largest opposition party.

In Korean politics, it is very unusual for an opposition party leader to attend a New Year’s event at the Blue House, even if invited. Under the former Lee Myung-bak administration, no DP leader attended a New Year’s occasion hosted by the president.

When asked by reporters why he attended, the DP leader said he thought it would be meaningful to “show the will of the DP for communication with the president” amid “public concerns over miscommunication” between the president and the politics.

At Park’s first New Year’s address, attended by about 200 high-ranking government officials and leaders from both ruling and opposition parties, the president emphasized the unification of the two Koreas and her commitment to increasing per-capita income to $40,000.

“The administration should make all-out efforts for peace on the Korean Peninsula and the happiness of the people, actively dealing with the domestic and international risk factors and uncertainty,” she said.

“On the Korean Peninsula, still ailing from the instability and division [of the Koreas], we will have to forge peace and open up the new era of unification.”

All eyes were on her first official New Year’s message following a tumultuous 2013, which included the longest-ever strike by railroad workers, continual political fighting over how to reform the nation’s top spy agency and, in North Korea, the execution of Kim Jong-un’s powerful uncle Jang Song-thaek.

“The legislature should provide hope to people by proposing laws for economic recovery and national development,” she said. “The judiciary should stick to its principles and the law to prevent social unrest and root out ‘the four social evils’ in our society to make a safer nation.”

“The economic sector should create more jobs through bold innovation and investment, boosting international competitiveness so we can reach a per capita income of $40,000,” she said.

After the president’s speech, the DP leader was given a chance to speak as well.

To improve relations between the president and the opposition party, Kim proposed “a committee for grand social compromise,” where both ruling and opposition politicians, as well as economic leaders, could discuss controversial social issues such as the recent Korail strike.

When it comes to the unification of the two Koreas, he asked the government to be bold in changing how it deals with North Korean issues.

“We expect a rather forward-looking change from the government for the normalization of inter-Korean relations,” the DP chairman said.

When it comes to the ongoing probe into the National Intelligence Service’s interference in the 2012 presidential election via an online smear campaign, the DP leader asked the president to approve the appointment of a special prosecutor, who the party believes could be politically neutral in investigating the spy agency. The ruling party has opposed the idea so far.