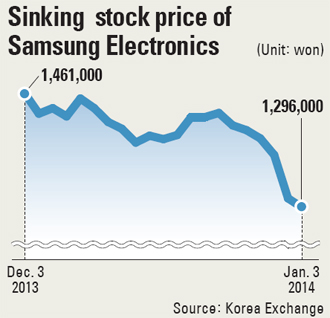 The year 2014 has already been terrible for the local stock exchange. On the first two days of trading, Seoul’s main bourse lost 65 points, or more than 3 percent, to sink to 1,950.

Although the Kospi had barely stayed above 2,000 on the final trading day of 2013, the sudden falloff was particularly alarming because most analysts were optimistic that the year would kick off favorably on the back of positive estimates for the economy in 2014 both abroad and at home.

The Korean government last month projected nearly a 4 percent expansion for the new year as advanced economies, particularly the United States, are getting back on track.

At the end of last year, brokerages such as HMC Investment Securities and Shinhan Investment predicted that the Kospi would reach 2,100 this month.

“Concerns over the economy, which has been the main factor keeping the Kospi from moving upward since 2011, have recently been eased,” said an analyst at Shinhan Investment late last year. “Usually confidence of an economic recovery goes a long way to encourage investors to make riskier investments.”

Even on the morning of Jan. 1, some analysts were confident that economic recovery in the United States, Europe, buoyant growth in China and acceptance of the U.S. Federal Reserve tapering off its stimulus measures would reduce any possible shocks to the local stock market.

Some brokerage firms projected the Kospi could reach as high as 2,500 within the year.

But contrary to widespread expectations, the market tumbled sharply. The downward fall eased on the second day, but fear had already sunk in.

A trader at the headquarters of Korea Exchange Bank on Friday watches the Kospi index dropping to 1,946.14 points, its lowest level since Sept. 4. Over the first two trading days of the new year, the Kospi plunged by 65.2 points. [NEWS1]

“There’s a saying in the stock market that the performance for the whole year can be discerned by looking at how it moves on the first five days of the year,” said Shin Joong-ho, a strategist at E-Trade Securities. “If such a saying is true, this is going to be a difficult year.”

The Kospi’s behavior last week was also a contrast to the beginning of last year when the market started off favorably by gaining 34.05 points, or 1.71 percent, to close at 2,031.1, despite growing concerns over the weak Japanese yen championed by the Shinzo Abe administration. It took several days before the market started to sink below the 2,000 barrier.

So what’s plaguing the Kospi from Day One of 2014?

The biggest factor, as some analysts feared all along, was the exchange rate.

As a result, this has lowered expectations about Korean companies’ performances in the new year, especially the nation’s largest conglomerate, Samsung.

However, many brokerage firms are estimating a disappointing performance for the company as of 2013’s fourth quarter largely because of the won’s strength, along with the maturing of the smartphone market.

In the third quarter of last year, the Korean smartphone maker had a record of 10 trillion won in operating profit, which only a few companies in the world have achieved.

The fear of a disappointing performance particularly spooked foreign investors, which held for more than 44 percent of the company’s shares, and they started to offload them.

As a result, Samsung Electronics’ shares finally fell below 1.3 million won per share. This was the first time since Aug. 23 that the share value dropped below that mark. In just two days, its shares fell nearly 6 percent from the end of 2013’s 1.37 million won and its market capitalization shrunk nearly 12 trillion won to 190 trillion won.

The tumble of Samsung Electronics pulled other stocks with it. Hyundai Motor, the second-largest conglomerate in Korea and the second-largest company in the stock market by market capitalization, didn’t do well. Its stock tumbled more than 5 percent in the first two trading days, falling from 236,500 won at the end of last year to 224,000 won.

Hyundai Motor, as well as its main affiliate Kia Motors, is struggling with the weakened Japanese yen, which raises the competitiveness of its Japanese rivals such as Toyota. 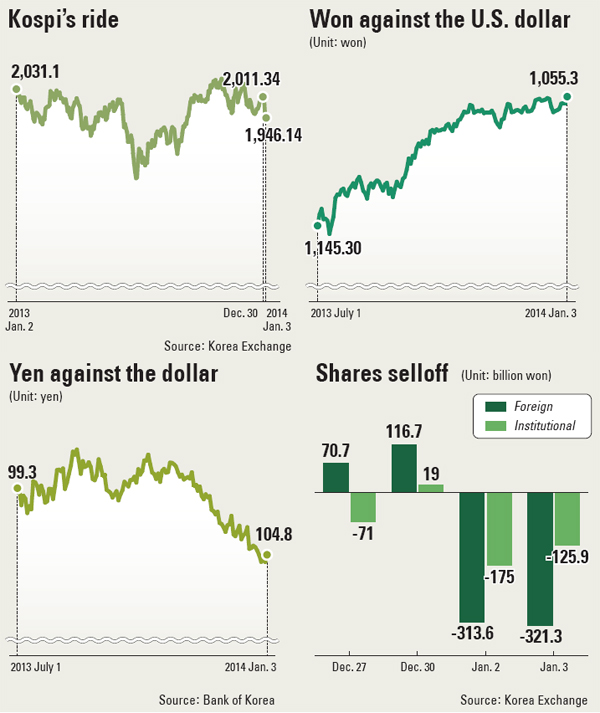 Although the yen strengthened on Friday to close at 104 against the dollar, the psychological effect of it falling to 105 for the first time since 2008 has already been felt by Korean exporters.

“The question throughout the year [in the stock market] is what factor will make it grow?” said Shin of E-Trade. “It won’t be easy in finding an immediate alternative for Samsung Electronics or Hyundai Motor.”

But not all investors are in despair. They note that in recent years the volatility of the market has been fairly limited, and therefore the Kospi may not fall as sharply as many fear.

In fact, Seoul’s main bourse fluctuated between 1,780 and 2,059 throughout 2013. According to market analysts, this is the narrowest range the market has seen in its history.

“As the economic momentum of countries [like the United States and China] are expected to further improve this year, that will contribute to the improvement of Korean companies’ profits, leading to valuation normalizations [of Korean stocks],” said Lee Kyung-min, an analyst at Daishin Securities.

Some analysts are projecting that the near zero interest rate monetary policy pushed by advanced economies - including the United States, Europe and Japan - will also help the Kospi advance upward as this would keep investors in the stock market over bonds and bank deposits.