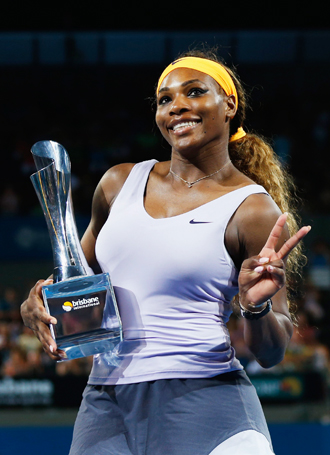 Serena Williams showed she has carried her momentum from 2013 into the new season, beating No. 2-ranked Victoria Azarenka 6-4, 7-5 on Saturday to defend her title at the Brisbane International and set the tone for the Australian Open.

The top-ranked Williams extended her winning streak to 22 matches with the emphatic win over the reigning Australian Open champion, making it back-to-back victories over two of her main rivals. She beat four-time major winner Maria Sharapova in straight sets in the semifinals.

The year’s first major starts Jan. 13 at Melbourne Park and Williams, who won 78 of her 82 matches and collected 11 titles last year, is positioning herself as the favorite to claim a sixth Australian title. She improved to 14-3 against Azarenka, who beat Williams in two finals last year and was the last person to defeat the American in August in Cincinnati.

Williams earned the first break in the seventh game and hit fired consecutive aces to finish off the first set in 37 minutes.

The 17-time major winner went up a break immediately in the second set before Azarenka won four straight games to take a 4-2 lead. Williams, who was comparatively silent against a screeching opponent for the second straight night, let out a scream of relief and satisfaction after hitting an overhead winner to break back in the seventh game.

And she yelled and pumped her arm again after converting a break in the 11th game with a backhand down line.

Serving for the championship, Williams started with two aces - her 10th and 11th - and then hit a service winner to set up two championship points at 40-15. She fired an unreturnable serve to finish it off.

The Williams sisters were hoping to both win a WTA Tour event in the same week for the first time in 15 years, but Ana Ivanovic prevented that when she beat Venus Williams 6-2, 5-7, 6-4 in the final of the ASB Classic in Auckland, New Zealand.

It was the end of a personal drought for the second-seeded Ivanovic, who claimed her 12th career singles title and her first since Bali in 2011.

Venus Williams was the crowd’s sentimental favorite after reaching the final of her first tournament since September.