Koreans spent about 90 minutes a day using portal services via smartphones, closing in on the amount of time they use portals via their PCs, the KT economic research institute Digieco said yesterday. 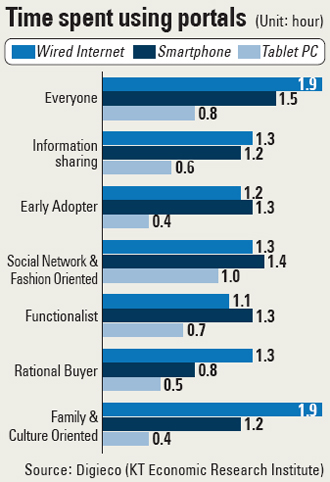 According to a report released by Digieco, Korean used the wired Internet for 114 minutes a day, followed by wireless Internet through smartphones for 90 minutes. Use by tablet PCs averaged 48 minutes a day.

The research team surveyed 754 Internet users between the ages of 19 and under 59 for 10 days since last Aug. and categorized them into six lifestyle groups: Information Sharer, Early Adopter, Social Network & Fashion Oriented, Functionalist, Rational Buyer and Family & Culture Oriented. Information sharers mainly consisted of males in their 30s who are dedicated to sharing information and content through portal services.

Early Adaptors, mostly males in their 40s, are into new products and services and want to use them before other people.

The Social Network and Fashion Oriented group consists of people who are interested in creating and maintaining social relations while pursuing fashion and trends.

Functionalists attach great importance to the functions of digital devices and media and use them to make life more convenient.

Rational Buyers are people who use the portals to make carefully planned purchases, not impulse purchases, and are mainly men in their 40s.

The Family and Culture Oriented group, mostly women in their 30s, are family oriented types who also seek out cultural activities.

As to how the smartphone users access portal services, the survey said 51.7 percent used apps and 48.3 percent used mobile browsers.

For tablet PCs, however, due to its bigger screen, people used mobile browsers more.

The Family and Culture Oriented group used the wired Internet portal services the most, spending an average of 90 minutes a day on them.

The Rational Buyers and Family and Culture Oriented users used Naver the most, while the Information Sharing group used Daum and Google.

As for the most popular portal services, both wired and wireless Internet users chose search and news. One out of five smartphone users said they watch Web cartoons.