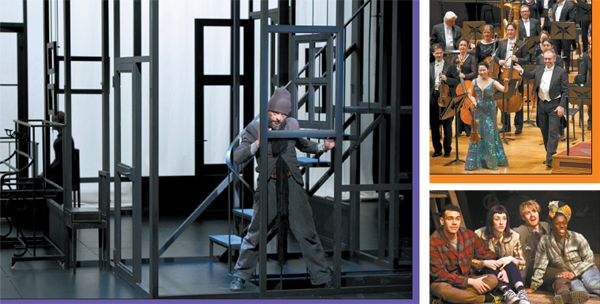 Left: Victor Hugo’s “One-Thousand Franc Reward” will be staged at Seongnam Arts Center in October. Provided by Brigitte Enguerand Right top: London Philharmonic Orchestra will perform at Seoul Arts Center under the baton of Daniel Harding. Provided by Vincero. Below: “A Midsummer Night’s Dream” as staged by Tom Morris at the National Theater of Korea. Provided by NTOK

Every year, an increasing number of musicals, ballets, plays and classical concerts are held in Seoul’s major venues for the performing arts. Sadly, even at the best halls, not all shows are a must-see, and finding the best events takes work.

Here are some of the must-see performances this year being offered by the country’s major venues.

Director Tom Morris, who won six Tony Awards for his hit show “War Horse,” is coming back to Korea in April to stage “A Midsummer Night’s Dream.” Morris reunited with South Africa’s Handspring Puppet Company, the group that created much of the puppetry magic for “War Horse,” and applied their amazing designs for this Shakespeare comedy.

The play is, of course, the adventures of four young Athenians and six actors who are being controlled by the fairies. This production is being put on to celebrate the 450th anniversary of Shakespeare’s birth, which falls on April 23.

The National Theater of Korea also will present plenty of Korean traditional work this year, and the most interesting should be “The Resurrection of Sookyeong” (“Suk-yeong Nangja-jeon”), a changgeuk, or Korean opera performed with pansori-style narrative singing.

As part of the National Changgeuk Company’s pansori restoration project, director Kwon Ho-seong has reinterpreted the “Sookyeong” story so that the younger generation can better understand and appreciate it.

This changgeuk is set during the Joseon Dynasty (1392-1910) and tells of a love triangle between a Taoist fairy, Sook-yeong, and her true love Seon-goon, a mortal from earth, and Sook-yeong’s jealous rival Maewol.

In addition, the National Theater will be putting on its popular “Janghwa and Hongryeon” from April 1 to 6, a creative retelling of the traditional tale.

Among the many classical orchestras coming to Korea this year, the Bavarian Radio Symphony Orchestra will be the most anticipated by classical music fans, thanks in part of the internationally acclaimed Polish pianist Krystian Zimerman who will be joining them. This is Zimerman’s first time coming to Korea in 11 years.

The performances will be led by Mariss Jansons and will feature Dvorak’s Symphony No. 9 and Mussorgsky’s “Pictures at an Exhibition.” Zimerman is scheduled to perform Brahms Piano Concerto No. 1. The concert will be held on Nov. 18 and 19 at the Arts Center’s Concert Hall.

For the ninth time, the London Symphony Orchestra will be playing in Korea, but it’s still one of the most anticipated classical concerts of the year. Pianist Kim Sun-wook will collaborate with the orchestra on one of two concert days under the baton of Daniel Harding. Harding first conducted the Berlin Philharmonic at 21 years old, becoming the youngest-ever conductor to do so. The two concerts will be held on March 10 and 11.

And for piano fans, there’s one more really notable show coming this year - the powerful pianist Evgeny Kissin will be playing on March 30.

A Korea production of the successful French musical “Le Roi Soleil,” about the life of Louis XIV, will be staged for the first time. The musical premiered in 2005 in Paris and has been staged more than 400 times in Europe, attracting 1.7 million people. The Korean production is scheduled to start in April and will feature the full staging and costumes as the Paris original.

The Seongnam Arts Center is also staging Victor Hugo’s less-known work “One-Thousand Franc Reward.” Although not as well known as his “The Hunchback of Notre-Dame” or “Les Miserables,” this posthumously published work is also highly regarded.

Completed in 1865, Hugo is said to have refused to turn it into a play until “the true freedom comes.” The play was never staged in Hugo’s lifetime. The performance will be staged on Oct. 24 and 25.