Yoon Yeo-joon teams up with Ahn

Yoon Yeo-joon teams up with Ahn 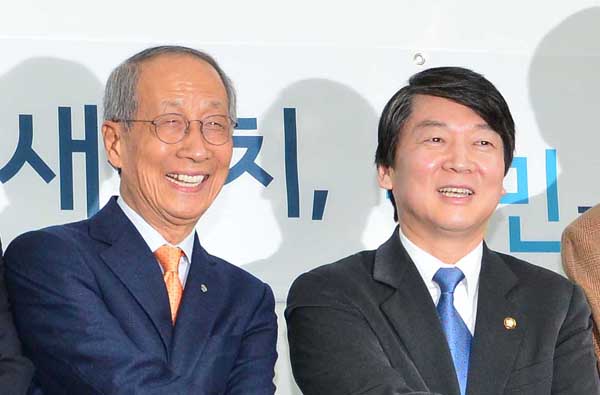 Senior politician Yoon Yeo-joon yesterday joined the faction of independent lawmaker and former presidential candidate Ahn Cheol-soo, which is soon to become a political party ahead of June’s local elections.

Although Ahn’s tentatively titled New Politics Preparation Committee, which is to become a cornerstone for his party, has gained a noteworthy following amid criticism that it lacks supporters, many have questioned Yoon’s shift in allegiance. The 74-year-old former environment minister has had roles in various political parties - conservative and liberal - over the past several decades.

He was appointed as a co-head of the committee.

He also stressed that Representative Ahn’s new party is indicative of the emergence of a “third-generation” style of politics.

“New politics has long been my wish, and if Representative Ahn’s new politics are the historic command, I thought adding power - even if my capacity isn’t sufficient - was my duty,” he said.

This is the second time the elderly politician has professed his support for Ahn, who was briefly a presidential candidate in 2012 but later withdrew to avoid a split in liberal votes. When Ahn’s popularity peaked ahead of the Seoul mayoral election in 2011 in the hopes that he would make an ideal presidential candidate, Yoon was singled out as Ahn’s mentor.

However, their political partnership disintegrated soon after Ahn’s remark that, “If Yoon is my mentor, my mentors total almost 300.”

Both the ruling and opposition parties were immediately critical of Yoon’s decision.

“Yoon is one of a few politicians who is very knowledgeable about the conservatives, but at the same time can talk very well about liberals,” Representative Hong Moon-jong, the secretary-general of the Saenuri Party, said yesterday at a press conference.

“However, we need to consider whether he truly matches the person Representative Ahn describes as appropriate for ‘new politics.’”

“New politics is not something that is possible simply with Zen dialogue, such as rhetoric or ideal,” he said.

Yoon, who started his career as a newspaper reporter, long represented the conservative faction as an election strategist. He served as a lawmaker for the Grand National Party, the former body of the Saenuri Party, from 2000 until 2004, and as minister of environment under the previous Kim Young-sam administration.

Yoon surprised the nation after he assisted in the presidential election campaign of Democratic Representative Moon Jae-in in 2012.

“I don’t care about what anyone says,” said Yoon, when questioned about criticisms regarding his frequent political shifts. “[What really matters is whether] I have done things that I am not ashamed of.”

Ahn, who declared in late November that he would set up a new political party, had been trying to convince Yoon to join him since August.

“Experience and wisdom are more important than anything else for us,” Ahn said at the conference. “Yoon, the former minister, has a multitude of experience in Korean politics and holds the belief that Korea needs rational reform.”