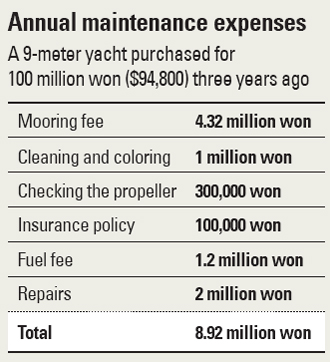 BUSAN - On Jan. 1, a large red sticker appeared on a 17-meter (56-foot) yacht moored at the Suyeongman Yacht Harbor in Busan reading, “Mooring fee delinquency.” Another sticker on the floating bridge to the ship stated, “Power and water supply suspended.”

The delinquencies are a growing problem in Busan. There are 480 yachts of all different sizes housed at Suyeongman - either on land or water - and the owners of 148 of them are behind on their payments. All told, they owe the city 1.16 billion won.

Fed up, Busan has finally started taking steps to get its money. For the 25 delinquent yachts marooned on the water, the harbor cut off water and electricity as of Jan. 1 - an unprecedented move since Suyeongman Yacht Harbor opened in 1986.

Losing water and power will be particularly tough for the people who live on their ships, as they will not be able to use basic facilities such as refrigerators, sinks and toilets.

Also targeted are the yachts not registered with the local government, which makes it impossible for the city government to seize the property of the owners.

Under the Water Leisure Safety Act, every yacht is supposed to be registered. However, the level of punishment for not registering is much smaller than the costs of following the regulation. Those caught by the marine police in the ocean are subject to a 400,000 won fine, while registration can cost several million won depending on the yacht’s price tag and its length.

The city is trying to take action against the 123 yachts currently stored on shore at the marina that have delinquent payments, preparing a procedure to temporarily seize the owners’ properties. 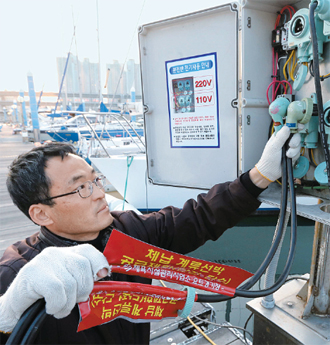 A worker from the Busan city government unplugs a yacht at the Suyeongman Yacht Harbor on Jan. 1. The city cut off the electricity and water supply to 25 yachts stationed there whose owners failed to pay a 100,000 won (94 dollar) to 360,000 won monthly mooring fee. The measure is the first of its kind since the yacht harbor opened in 1986. By Song Bong-geun

Many buy yachts as a symbol of wealth and luxury but do not realize how expensive they are after purchasing them. Mooring fees increase with a ship’s size. One that is less than 5 meters (5.5 yards) long costs 100,000 won per month, but those 9 meters or longer cost 360,000 won monthly - that’s 4.32 million won each year. Cleaning and painting a ship once a year costs between 500,000 won and 2 million won depending on the size, and fuel is not cheap, either.

Some yachts belong to corporations that imported used boats from Japan to sell here, but they went unsold because of the poor economy. A used ship costs from 10 million won to hundreds of millions of won, plus it can cost millions of won more to get a vessel shipshape.

“I bought a yacht simply because I was attracted to it,” said Kim, a 59-year-old man. “But the maintenance expenses were beyond my capacity and the mooring fee really became a burden. I tried to sell it, but it wasn’t easy, so I just left it there.”

“It’s a problem. Those who purchased yachts just to show off are devoid of any sense of reality,” said Yoon Tae-geun, chief executive of Hansan Marina Resort and the first Korean to travel around the world in a yacht. “You should be sufficiently ready for the various layers of maintenance fees before deciding to buy a yacht.”