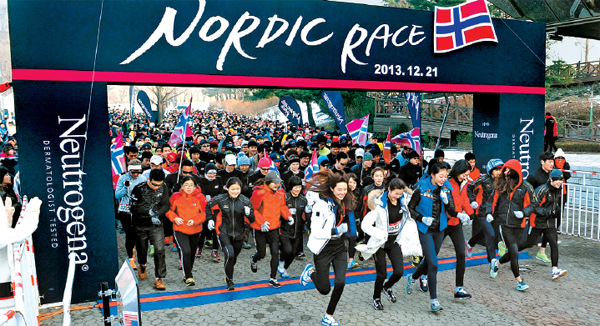 Runners kick off the 7-kilometer course at the first Neutrogena Nordic Race on Dec. 21 at Seoul Grand Park in Gwacheon, southwest of Seoul.Provided by the company

Nearly 3,000 runners, bundled up in multiple layers and wearing earmuffs, faced on MC on stage while warming up for a 7-kilometer (4.3-mile) race at Seoul Grand Park in Gwacheon, southwest of Seoul.

He repeated the same message that morning on Dec. 21: “Don’t try to overtax your strength. Flex your legs as much as you can before you start running. You don’t necessarily have to run from the beginning to the end because what’s most important is your health and safety. You have to be careful, particularly because it’s winter and very cold today.”

Participants in the newly established Nordic race ran up and down a hill, past an outdoor zoo and a national art museum in temperatures that reached as low as negative 7 degrees Celsius (19.4 degrees Fahrenheit).

Artificial snow and ice were draped along the track’s two routes, which added a sense of whimsy to running in severe cold.

The race was hosted by American skin care brand Neutrogena.

It was a rare winter event, given that most endurance races take place in the spring or fall in milder climates, and this was just one of a handful of new types of short-distance races that popped up over Korea in 2013.

In the past, older adults looking to stay fit and healthy tended to participate more actively in full marathons, which span 42 kilometers. Yet short-distance races - between 5 kilometers and 10 kilometers - have recently transformed into trendy events for novice runners in their 20s and 30s.

Those between 25 and 35 accounted for more than 60 percent of the participants in the Neutrogena event, according to its public relations manager.

“I am usually very athletic and began joining a lot of running events this year,” said 29-year-old Lee Hwan-hee, who ran alongside three of her friends in the race. “The short-term marathons are fun but not too burdensome, which is why I was attracted to them.” 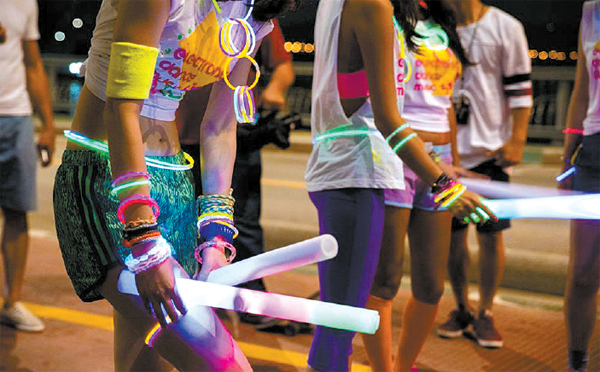 Participants, holding neon glow sticks, enjoyed electric music during a night run at the Electronic Dance Music 5K Run on Nov. 17 at Kintex convention hall in Ilsan, northwest of Seoul. From the event page on Facebook

For Oh Young-hoon, a runner in his early 30s, the Neutrogena event marked the first time he had raced in cold weather.

“At first I was nervous about running in sub-zero temperatures, but I realized that exercising in heavy layers is better than [running] in the heat and the sun in shorts,” he said.

The majority of the endurance races launched last year have adopted unique themes to add a more social and creative aspect to an athletic activity largely perceived to be boring and lonely.

The majority are sponsored by commercial brands aimed at promoting their products and boosting brand value.

Registration fees range from 10,000 won ($9.50) to 50,000 won, and runners are usually given an array of souvenirs, including T-shirts, bags, cosmetics, snacks, medals and free admission to post-race events.

“A survey showed that the most commonly bought cosmetic product in winter is hand cream; [Neutrogena is] best known in the business for that specific kind of product, and that inspired us to host the run,” said a public relations manager for Neutrogena.

“It was a kind of experimental challenge for us because a commercial marathon event in winter is something new. But the event turned out to be more successful than expected, and we intend to host it again in 2014.”

Several races from the past year have proven immensely popular with strong turnouts.

The Wolmi Nude Marathon on Dec. 17, at Wolmido Port near Incheon, had almost 2,000 participants - mostly men. A majority of runners raced shirtless, not fully naked, wearing only short pants.

Other events have incorporated live music or turned the idea of a race on its head.

The Electronic Dance Music 5K Run on Nov. 17 featured well-known domestic DJs who played electronica at five different music stations over the 5-kilometer route, which was held at a Kintex convention hall in Ilsan.

The event attempted to dispel conventional thinking that races always have to have a competitive edge or be held during the day.

Similarly, Zombie Run was held on the evening of Nov. 2 at Seoul Land, an amusement park in Gwacheon, to celebrate Halloween. There, thousands of runners were chased by volunteers dressed up as “zombies” through a 3-kilometer obstacle course.

And Color Me Rad - a race that gained substantial popularity in the United States in 2012 and has spread to nearly 100 countries - attracted almost 10,000 participants.

Runners were blasted with so-called color canons, which coated them in a multitude of neon shades throughout the 5-kilometer route. The event, hosted last summer, was held at Jamsil Sports Complex in southeastern Seoul.

The newfound marathon craze among young people seems to have been propelled by a race hosted by Nike in 2008. The American sports apparel company sponsored a 10-kilometer race starting in Gwanghwamun, central Seoul, that saw nearly 2,000 participants.

The race, called “We Run Seoul,” has gained enormous popularity over the past few years, and has boasted 3,000 participants since 2011.

“Runners aged between 20 and 30 were the absolute majority of ‘We Run Seoul 2013,’ making up 97 percent of the total,” said a Nike public relations manager, adding that the average age of runners last year was 27.

The race proved to be such a hit that online registration in 2012 wrapped in just 12 minutes. Last year, Nike had to adopt a new sign-up method, giving priority to runners who registered using its mobile phone application.

“People ran to overcome themselves and test their limits when times were difficult,” said a so-called Nordic Race pace patroller, in his 50s. “That’s why the popularity of marathons among the general public culminated during the International Monetary Fund era [during the 1997-98 Asian financial crisis].”

The man, a member of a marathon club in Seoul who requested anonymity, said he has run dozens of full marathons over the past few decades.

With a “pace control” badge attached to his backpack, he said he was responsible for monitoring and keeping time for fellow runners as they made their way through the course.

“Today, many of those who ran then seem to have migrated to costlier cycling or mountain climbing activities. But I’m glad [endurance racing] has spread to the country’s younger generation,” the man continued.

“You don’t always have to be a professional marathoner to run. One good thing about a marathon is that it doesn’t cost you anything. You only need your body. If it’s fun, that’s it. What more do you expect?”