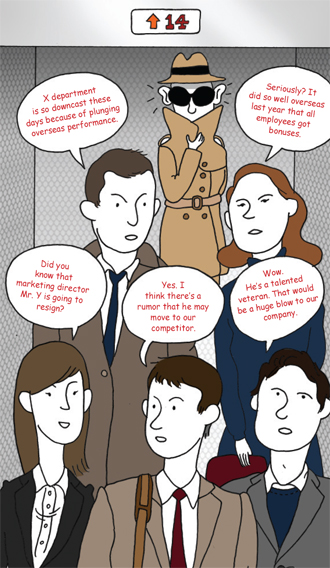 A Samsung Asset Management fund manager surnamed Han always takes several packs of cigarettes with him during his undercover investigations into the inner workings of companies.

When Han arrives at the company, he first drops by the security office, where he smokes with security guards, which naturally leads to conversations about the company’s atmosphere and the people who enter and leave the building. Once he builds a rapport, he can even access visitor’s records.

Like Han, rising numbers of Korean fund managers nowadays are working on their feet to determine which company to invest in.

There are many ways to assess potential investment targets, such as financial statements, business plans and investor relations data. Many fund managers, however, consider an on-site visit as the crucial final step.

“Information provided by companies is well refined and tends to emphasize only their positive sides. So I usually find a decisive piece of information during a visit,” says Park Kyung-ryun, director at Mirae Asset Global Investments.

“Once a company seems attractive, I go on a trip to find out what differentiates it from others, and what business model it pursues,” said Choi Woong-pil, director of stock investment at KB Asset Management.

“I prioritize companies that have been marginalized in the market due to prolonged low stock prices, especially those that recently showed signs of change,” says Park In-hee at Shinyoung Asset Management.

GS Home Shopping, which had significantly lower operational profit compared to competitors in early 2012, is an example. Park, however, realized the shopping mall that markets via television was holding an extraordinary amount of cash revenue on financial statements, which led her to conclude that the company’s condition would only improve.

When she made a trip to its headquarters, GS Home Shopping was undergoing a structural reshuffle to refresh the corporate atmosphere. Park, who considers fostering talent as one of the most important indicators of corporate value, immediately bought the company’s shares and saw a great return.

Some fund managers spend their days in elevators.

A 45-year-old manager, who asked to be identified as Mr. Lee, pays close attention to conversations between employees. When he gets lucky, Lee is able to obtain unfiltered inside information.

“When the employees sound too confident about their company’s performance, you have to be careful,” he says. Such an attitude indicates the company is likely to have peaked.

Lee also described his visit to Lotte Shopping headquarters in 2011. Back then, Lotte Shopping shares peaked at 500,000 won after it acquired a Chinese retailer and enhanced its local performance. He recalls Lotte employees bragging about their company and the side effects of overconfidence.

“For the retail industry, the local economy determines the overall condition of the industry. However, Lotte Shopping was not prepared with a clear response to the economy’s volatility,” he says.

As the economy slowed in the middle of the year, the company’s share price fell below 300,000 won.

“In addition to the visit, I try to gather advice from other industry experts and visit the company’s competitors to ensure that the corporate assessment is as objective as possible,” she said.

KB’s Choi assures the credibility of information given on corporate investor relations by visiting a company several times. “If I cannot trust a company, it is difficult to make an investment regardless of past glories,” he says. “You cannot continue your relationship long with a girlfriend who lies all the time.”

There is a rule of thumb among fund managers: Stock values are at their best when the company does not spend too much on fancy facilities.

Meanwhile, there are realities even veteran fund managers can’t figure out, such as overseas performance.

“We tend to devalue achievements from local corporations’ foreign factories or corporate bodies because they can be difficult to verify,” says Han Sang-soo, director at Samsung Asset Management.

Park Kyung-ryun, director at the Mirae Asset Global Investments, says the primary job of fund managers is to dig out a company’s true value after thoroughly studying different kinds of information, from growth potential suggested by the company to impressions after corporate visits to analyses by investment departments.

“In this regard, a corporate visit is one of the final ways to verify a company’s investment potential,” he says.