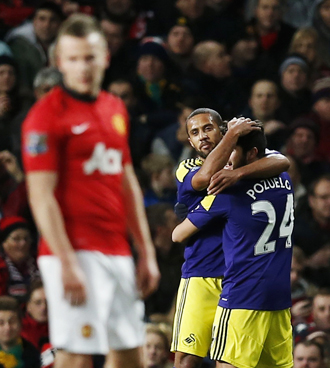 Manchester United suffered a stinging 2-1 home defeat by Swansea City in the FA Cup third round on Sunday as their former fortress of Old Trafford was ransacked for the fifth time this season.

Reduced to 10 men for the closing stages after Fabio was sent off, Swansea’s battering ram striker Wilfried Bony climbed high to head home a powerful 90th-minute winner and leave United boss David Moyes to face questions about his management.

Another boss under pressure is West Ham United’s Sam Allardyce, whose woes intensified after the Premier League club was thrashed, 5-0, by second-tier Nottingham Forest.

Forest’s Jamie Paterson netted a hat-trick in the humiliating rout, but the spotlight was on Allardyce, who was accused of waving the white flag by making nine changes to his starting lineup with an eye on the League Cup semifinal at Manchester City on Wednesday.

Chelsea showed their fellow Londoners how to negotiate a potentially tricky Cup tie in the east Midlands, winning 2-0 at second-tier Derby County.

Liverpool avenged last season’s Cup defeat by Oldham Athletic, winning 2-0 at Anfield with Iago Aspas scoring his first goal for the club, and Sunderland also came through, 3-1, against Carlisle.

With Manchester United’s former boss, Alex Ferguson, sitting in the stands, they looked a far cry from the side that the Scot led to the Premier League title last season.

A chorus of boos rang around the ground as Swansea became the fourth team to walk away victorious in United’s last six home encounters in all competitions, a run of results that would have been almost unthinkable under Ferguson.

“We were a bit unlucky to lose but probably did not do enough to win in the end,” Moyes told BT Sport.

“If you lose games at any club it’s a big deal, but at Manchester United it’s even bigger. We have got a big game on Tuesday [League Cup semifinal first leg against Sunderland]; we must get the players ready for that.”

It was the first time Swansea had tasted victory at United’s home ground, but it was far from a smash-and-grab raid.

Having lost their fourth home Premier League match last week against Tottenham Hotspur, the Old Trafford fans were again fearing the worst when Swansea went ahead with a lobbed finish from Wayne Routledge after 12 minutes.

Javier Hernandez restored parity with a close-range finish four minutes later, but that did not prove to be a platform on which the hosts could build.

The second half was not easy on the eye and was only sparked into life when substitute Fabio was sent off for a lunging, studs-up challenge on Jose Canas.

Late goals were United’s speciality under Ferguson, but having only scored more than one goal once in their last six at home, Swansea were the more likely victors.

So it proved when Bony rose unmarked at the near post to head Routledge’s cross into the top corner.