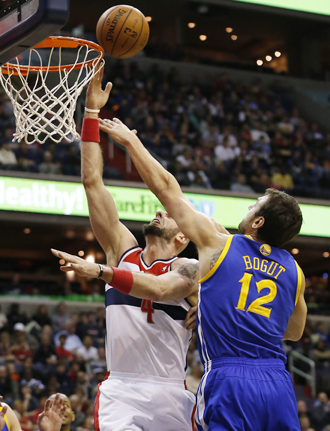 Klay Thompson scored 26 points, Stephen Curry and Andrew Bogut connected on a trick play worthy of the NBA’s slam dunk contest, and the Golden State Warriors have their longest in-season winning streak since 1975 after Sunday night’s 112-96 win over the Washington Wizards.

The Warriors won their ninth in a row by turning the third quarter into a laugher, opening the period with a 30-5 run that included a sequence in which Curry drove into the paint and sent the ball flying out of his hand and off the backboard above the rim. The carom went right to a leaping Bogut who timed the play perfectly for a dunk, then stared at his right hand with mouth agape as he ran down the court.

The Warriors hadn’t won nine straight in the same season since a 10-game run from Dec. 6-23, 1975. They also had a nine-game regular season winning streak that overlapped the 1990-91 and 1991-92 seasons. Golden State is 5-0 on its seven-game, 13-day road trip and moved into a tie with the Los Angeles Clippers atop the Pacific Division.

Curry and Thompson topped John Wall and Bradley Beal in the battle of the two highest-scoring backcourts in the NBA. Curry scored 14 points on 5-for-17 shooting, but the league’s most turnover-prone player had 10 assists and only two giveaways. Thompson was 9 for 14 from the field, including 6 for 9 from 3-point range.

Wall had 14 points and 10 assists, but he shot 4 for 11, including 1 for 5 in the crucial third quarter. Beal, who remains on a minutes restriction because of a left leg injury, scored nine points and 4-for-15 shooting. The Wizards made only 6 of 21 shots in the third quarter, and they hit bottom when Nene committed two backcourt bad-pass turnovers in a span of six seconds.

Nene also scored 14 points for the Wizards, who have lost three straight and four of six.

The first half, by contrast, was as competitive as could be. The teams were tied 58-58 at the break, each with 22 field goals and 13 assists. The Wizards were 14 for 21 from the field in the first quarter, and a 9-0 run gave them a 10-point lead early in the second, but the Warriors came back with a run that included Curry’s behind-the-back pass to Lee - an assist that would be eclipsed by the off-the-backboard feed to Bogut in the second half.