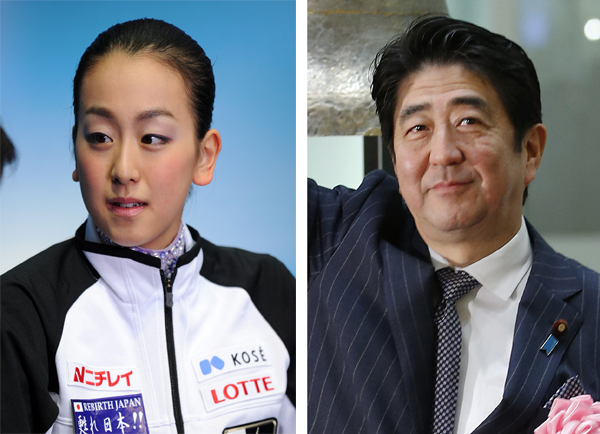 Japanese Prime Minister Shinzo Abe and figure skater Mao Asada were chosen as notable male and female celebrities born in the Year of the Horse in the Asahi Shimbun’s Jan. 1 edition. While the year is unrelated to their zodiac signs, Abe and Asada, who appear on television almost every day, resemble each other in some ways - though fans of Asada may beg to differ.

Born in 1990, Asada revealed her hidden ambitions for the Sochi Winter Olympics, which are set to open on Feb. 7. “I will make strenuous efforts to return with a medal of the best color,” Asada said while standing in front of a Japan Airlines plane.

She added, “I will do my best. I hope I can finish the Olympics with a smile.”

Some media made a fuss, claiming that Asada had declared her intention to win the gold medal. So far, she had remained reserved, saying, “I want to present a better performance,” or “I want to aim higher.”

But she has now mentioned the color of the medal publicly. She must have felt frustrated finishing third in the All-Japan Figure Skating Championships. And she declared war on Korea’s Olympic gold medalist Kim Yu-na. Her “trivial provocation” is rather refreshing, and figure skating fans are eager to see the competition play out.

Around the same time, Japanese Prime Minister Abe, born in 1954, began showing his innermost thoughts. On the anniversary of his government on Dec. 26, he made a sudden visit to the Yasukuni Shrine. His eager and excited face made me wonder how he had refrained from visiting the shrine all this time. He also sided with revising the pacifist Constitution. At the end of last year, he said, “For what did I become a politician? Constitutional revision is my life work. I want to make it no matter what.” And at the beginning of 2014, he said, “We need to have more national discussion for constitutional revision,” and “the revision will be completed by 2020.” The first year must have given him confidence, as he has become feisty. In the spring, Japan will begin modifying its constitutional interpretation to exercise the right to collective self-defense.

Just like champion Kim will try to defeat Asada and defend her gold medal, the Korean government has a lot of work to do and is under great pressure. As the United States and Japan become closely tied in with security issues, Seoul needs to display diplomatic caliber to put the brakes on Abe’s rightist inclination through diplomacy with the United States. We also need the wisdom to solemnly rebuke Japan’s faults while seeking cooperation. In the Year of the Horse, we hope Kim and the Korean government will live up to their potential without fault.