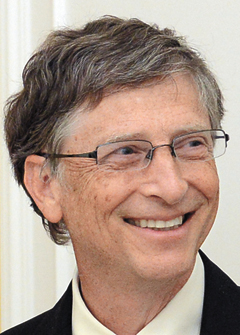 SEATTLE - Vaccines work wonders. They prevent disease and are relatively cheap and easy to deliver. Yet millions of children do not get them. This has always been stunning to me. When we started the Gates Foundation 15 years ago, we assumed all of the obvious steps were being taken. In fact, delivering basic vaccines is still one of our top priorities.

As I look ahead to 2014, one of the most exciting - and often overlooked - developments in the global push to give all children access to immunization is the growing role of emerging-country vaccine suppliers.

Countries like Brazil, China and India have faced many health and development challenges of their own, and they have made tremendous progress. They are using their experience and technical capacity to help other countries make similar progress.

Serum Institute of India, Bharat Biotech, Biological E, China National Biotec Group and Bio-Manguinhos, to name a few, have become some of our most valuable partners in global health.

By harnessing the same innovative spirit that transformed emerging markets into manufacturing hubs, these companies have become leaders in high-quality, low-cost vaccines.

The increased competition and new manufacturing approaches created by these companies have made it possible to protect a child against eight major diseases - including tetanus, whooping cough, polio and tuberculosis - for less than $30.

More than 100 million children a year are being immunized. As more suppliers enter the market, prices will likely drop further.

Consider the progress made with the lifesaving pentavalent vaccine, one dose of which protects against diphtheria, tetanus, whooping cough, hepatitis B and haemophilus influenza type b (Hib).

When the GAVI Alliance introduced it in 2001, there was one supplier and the cost was $3.50 per dose. Now there are five suppliers, and Biological E, an Indian company, announced earlier this year it would offer the vaccine for $1.19 per dose.

We have also seen major emerging countries invest in biomedical technology to supply developing countries with new vaccines. India’s Department of Biotechnology and Bharat Biotech announced plans this year to release a new vaccine against rotavirus - which kills hundreds of thousands of children - for $1 per dose, significantly cheaper than existing vaccines.

Likewise, a Chinese biotech company won approval in October from the World Health Organization to bring to market an improved vaccine protecting children against Japanese encephalitis.

Today, emerging-country manufacturers produce about half of vaccines purchased by United Nations agencies for use in the developing world, up from less than 10 percent in 1997.

Contributions of emerging-country vaccine producers often complement the work of their counterparts in developed countries. The Gates Foundation supported a major partnership between the Serum Institute of India and SynCo Bio Partners, a Dutch company, to produce a low-cost vaccine to protect more than 450 million people in Africa from meningitis.

This year, Biological E announced two major partnerships with multinational vaccine manufacturers. A joint partnership with GlaxoSmithKline will produce a six-in-one vaccine against polio and other infectious diseases; another, with Novartis, will produce two vaccines for typhoid and paratyphoid fevers.

More must be done to target 22 million children, mainly in the poorest countries, who do not have access to lifesaving vaccines. Their countries lose, too. Disease robs a poor country of the energy and talents of its people, raises treatment costs and stymies economic growth.

We live in a world where we have the power to correct this injustice. We have the know-how to produce effective, affordable vaccines and deliver them to the children who need them. Emerging-country vaccine suppliers are a critical part of this process. Project Syndicate