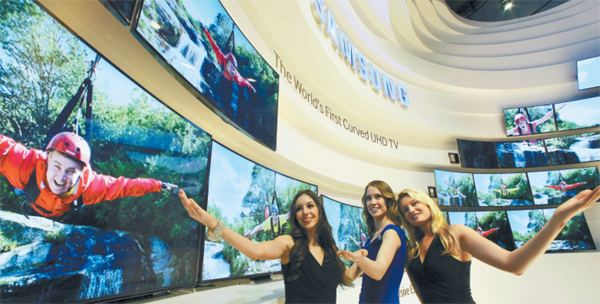 Samsung Electronics, which sells almost one of every three smartphones, wants to parlay that technology into automotive navigation and entertainment systems for an industry that makes more than 80 million vehicles a year.

Asia’s biggest technology company is pushing beyond the hardware that underpinned its growth as global demand weakens for high-end handsets. Samsung is attending the International Consumer Electronics Show in Las Vegas this week along with a record nine carmakers, including Audi AG and General Motors.

Businesses that reach from batteries and household appliances to memory chips, cameras and liquid-crystal displays provide components the Suwon-based company can use inside automobiles. Samsung is partnering with Intel on open-source software called Tizen that can run smartphones, tablets, TVs and car systems, and has garnered interest from automakers including Toyota Motor, the world’s biggest.

“In the past, passengers just used cars for moving, but now they want to enjoy entertainment and access to the Internet,” said Lee Seung-woo, an analyst at IBK Securities in Seoul. “It’s like a gigantic smartphone on wheels.”

Among the applications Lee expects in the future from Samsung are windows made of transparent flat-panels that provide map displays and other information for people inside the car while still enabling full visibility. It also may use sensors to monitor passengers’ health, to select music to match a driver’s mood and to analyze traffic and suggest a better route, he said.

Samsung declined to comment on its plans for the car sector, according to an emailed statement. The company is open to collaborations with automakers that could expand to include entertainment and navigation, President Hong Won-pyo said by email in October without elaborating.

Autos are set to be in the spotlight this year at CES, as carmakers look to catch consumer attention with new gadgetry in the cabins of their vehicles. Last year, more than 11,000 of the 150,000 attendees at the show described themselves as being in the automotive electronics business.

Samsung faces competition from chipmakers such as Freescale Semiconductor that have historically supplied the auto industry and relative newcomers such as Qualcomm, Nvidia and Intel. Qualcomm, whose radio chips are part of GM’s Onstar service, and Nvidia, which supplies the processors for Tesla Motors and Volkswagen AG’s Lamborghini vehicles, are trying to bring elements already widely used in mobile phones to cars. Intel, the largest maker of personal-computer processors, supplies Tata Motors’ Jaguar Land Rover and Hyundai Motor.

Samsung shipped a record number of handsets in 2013 and posted its highest quarterly earnings, yet its stock had its first annual decline in five years amid signs of slowing growth in high-end handsets and competition from Apple’s new iPhones.

Shares of the company, which reports its preliminary fourth-quarter earnings tomorrow, rose 1.1 percent to 1,310,000 won ($1,128) as of 2:02 p.m. in Seoul. The stock dropped 9.6 percent in the previous six trading days, a slump that erased about $19 billion of market value.

The company’s market capitalization is about $181 billion, ranking it among the 30 biggest in the world. Billionaire Chairman Lee Kun-hee on Thursday urged Samsung’s 236,000 workers to move beyond hardware and create new technologies, markets and business practices.

“We must give a bigger push for innovations,” Lee, South Korea’s richest man, said in his New Year’s speech to employees. Bloomberg