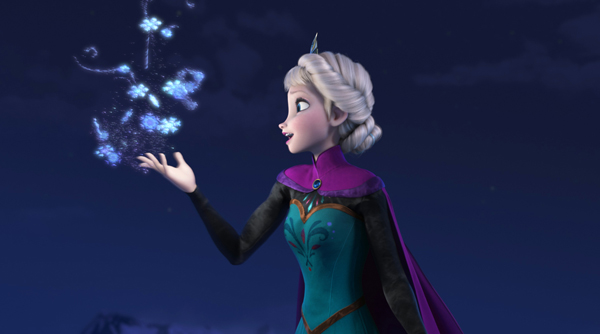 This image provided by Disney shows Elsa the Snow Queen, voiced by Idina Menzel, in a scene from the animated feature “Frozen.” According to studio estimates Sunday, “Frozen” remained atop the box office with 20.7 million dollars. [AP/NEWSIS]

LOS ANGELES/NEW YORK - Walt Disney’s animated fairy tale “Frozen” took hold of first place on movie charts in the United States and Canada for the first weekend of 2014, knocking three-time champion “The Hobbit: The Desolation of Smaug” down to the No. 3 spot.

“Frozen,” which opened on the eve of the long Thanksgiving holiday weekend in November, collected $20.7 million in ticket sales to claim the weekend box office crown, ahead of “The Marked Ones” which earned $18.2 million from Friday through Sunday, according to estimates from Rentrak.

Kristen Bell provides the voice for the lead character in “Frozen,” the story of a Scandinavian princess on a search for her missing sister, the queen.

The hit film is nearing a $300 million domestic total and has collected $640 million in global ticket sales, making it the highest-grossing Disney Animation release of all-time behind only “The Lion King,” Disney said.

“The Marked Ones” introduces new characters and a different story to the hit “Paranormal” franchise produced by horror filmmaker Jason Blum.

The new installment, designed to appeal specially to Latino moviegoers, features Hispanic actors and some Spanish dialogue in a story about a young man (Andrew Jacobs) in Oxnard, California, who learns he is marked for possession by a demon.

Distributor Paramount Pictures released “The Marked Ones” in January to give audiences something new after the family fare and adult dramas that crowded theatres around Christmas.

Box office forecasters had predicted the movie would start with $19 million to $23 million over the weekend. It cost just $5 million to make, a small sum for a Hollywood release.