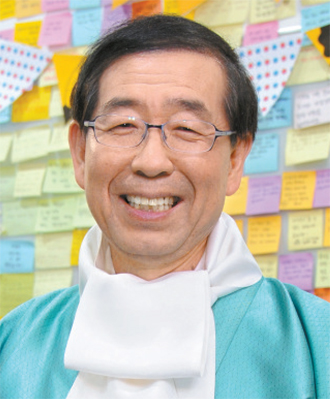 Fellow Seoul citizens, I wish you a Happy New Year filled with the growth and energy of the Blue Horse. Seoul has achieved a “massive transition,” rightfully guaranteeing ownership of the city to its citizens.

As promised, we expanded the ratio of social welfare to 32 percent of the total city budget. In addition, we achieved 92 percent of the goal to supply 80,000 public rentals, providing a more secure residential environment.

Another accomplishment is the reduction of more than 3 trillion won of debt by the end of last year. This is significant progress as many other local governments are suffering from financial distress. Halving tuition fees, providing a free meal service and offering regular jobs for irregular workers are also ways in which we have brought comfort to citizens’ lives.

Moreover, subway line No. 9, unsold apartments in the new town of Eunpyeong, the Han River’s floating islands and Dongdaemun Design Plaza are some problematic areas where we have applied innovative solutions. Through a variety of projects such as village communities, sharing city, crime prevention design and a social economy, we have renovated Seoul into a people-centered city.

Pursuing these changes was possible because we addressed them from the roots. I invited citizens to become the mayor of Seoul through three mechanisms: communication, participation and governance. In place of one-way notices or red tape, we implemented communication and cooperation, which has resulted in less conflict and more practical policies.

However, 2014 is not expected to be smooth. The sluggish domestic economy, the rise of jeonse (lump-sum deposits) and the collapse of local stores pose problems for ordinary people. In such circumstances, what can we do to improve citizens’ lives?

In answer to this question, I would like to stress “communication” again. Having achieved a perfect response rate to civil complaints at the Social Media Center last year, Seoul City will continue to pursue active talks with citizens. We will also disclose and share administrative information and Big Data for the sake of transparency.

The city will serve as a mother-like figure, embracing its citizens, solving their problems and promising a better future. Seoul City will ensure no one starves or falls asleep in the cold.

Seoul has also been making great strides internationally. Its problem-solving methods based on active communication are observed by not only the central and local governments but also foreign cities. While Seoul now takes sixth place in the Global Power City Index, we aim to rank No. 3. The vision that citizens rule the city, which I emphasized at the beginning of my term two years ago, would have been impossible to achieve without communication. I will uphold that resolution in the Year of the Blue Horse. I will serve as the driver of the galloping Blue Horse, listening to the voices of citizens and ensuring a better tomorrow.