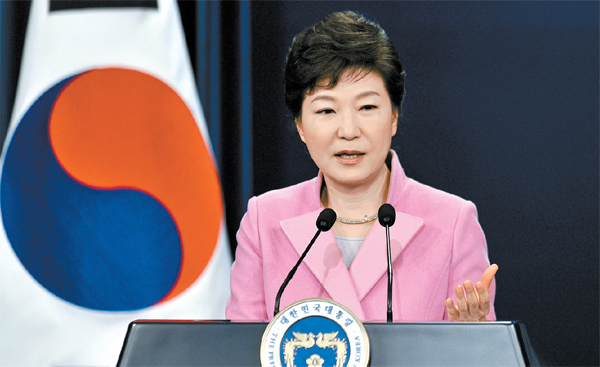 In her first presidential press conference yesterday, President Park Geun-hye drew up a blueprint for the reunification of the two Koreas, describing it as a huge opportunity for the local economy to leapfrog to a whole new level.

“Reunification is daebak [a jackpot],” she said when a reporter asked for further details on preparatory measures for reunification.

She cited investment guru and commentator Jim Rogers, who has repeatedly expressed his willingness to invest in North Korea on the upbeat outlook that reunification will be realized in five years and a unified Korea will emerge as one of the strongest economies in the 21st century.

As an initial step toward thawing the frozen relationship between the North and South, Park proposed that during the Lunar New Year holidays later this month the two Koreas hold reunions of families separated by the division of the Korean Peninsula 60 years ago.

“I wish that North Korea gets off on the right foot for inter-Korean relations with the reunions, thus forming a framework for the start of a new conversation,” she said.

Last September, Pyongyang unilaterally canceled reunions only a few days before their agreed date, which were meant to celebrate the annual Chuseok holiday. North Korea cited Seoul’s “confrontational policy” toward the North’s regime.

Park’s remarks were probably in response to North Korean leader Kim Jong-un’s New Year’s address on Jan. 1, in which he urged South Korea to take reciprocal measures to end the verbal attacks each side has repeatedly made against the other and work toward improving ties.

During a 17-minute speech prior to a question-and-answer session, the president said revitalizing the domestic economy through an overhaul of the public sector was a key goal for her second year in office. Public sector reform - aimed at “normalizing abnormal conventions prevalent across Korean society” - is part of the “three-year plans for innovating the economy” that Park aims to launch this year.

The plans, she said, would open up “an era of happiness for the people,” one of the slogans from her presidential election campaign.

One plan is to mobilize a creative economy scheme to help smaller businesses and start-ups in future-oriented science and technologies industries. Another is to boost local demand by supporting five promising service industries popular among the younger generation: medical services, education, tourism, finance and software. Park pledged to lift regulations, which she called the biggest barrier to investment.

“I will go back to the drawing board and review all the investment-related regulations and stop all of them unless they are really necessary,” she said.

“Since the size of debt in public institutions exceeds the national debt, some public companies cannot even manage to pay interest on their loans with their operating profits,” she said. “The phenomenon is not the fault of the companies alone. Some had their debt snowball after embracing government policies.”

Yesterday’s press conference was the first since the president took office last Feb. 25. Her only major official encounter with the press was when she delivered a statement urging the National Assembly to pass an amendment to the Government Organization Act in front of Blue House correspondents on March 4. She held the conference yesterday morning as a result of escalating criticism that she is reluctant to communicate with either the public or the media. The major portion of the 80-minute press event was devoted to a reiteration of previous positions on various state affairs.

“I know there are controversies over [my lack of] communication,” she said. “Of course I should make more effort at better communication, but we need to ponder the meaning of communication in a true sense. If communication means a simple, mechanical meeting, or reaching a compromise on arguments that go against the interest of the nation, that is not communication.”

She continued: “Before, when someone persistently made illegal and impossible demands, the government often met him halfway. But I think it is wrong to respond to such abnormal conventions. The prerequisite for true communication is to create a society where everyone respects and abides by the law and the law is fairly applied to anyone regardless of their social status.”

“The conference merely served as a public relations venue for the government.” Park did not address proposals DP leader Kim Han-gill made earlier in the day before the conference, he said.

The proposals from the Democrats included the government launching a special probe into the National Intelligence Service for its alleged political meddling during the presidential campaign in 2012 and coming up with comprehensive measures to resolve social conflict.

After the press conference, Park paid a surprise visit to press rooms on the first floor of Chunchugwan, an annex to the Blue House in central Seoul. The 61-year-old leader shook hands with each and every reporter and had a few conversations. It was the first time she had ever been in the press rooms.

Although Park is Korea’s first female president - raising hopes that she would help raise the social status of women - no women reporters at the Blue House were chosen to ask a question yesterday.

The majority of the almost 150 reporters at the event were men. Later in the day the president joined a New Year celebration hosted by the Korea Chamber of Commerce and Industry.