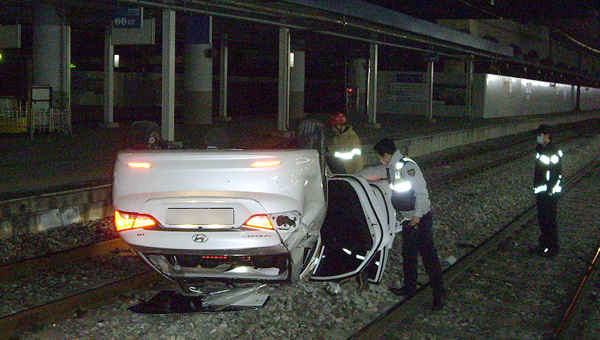 Five KTX bullet trains were delayed yesterday morning after a speeding car flew off an overpass in Daegu, flipped and fell 10 meters (32.8 feet) onto the railroad tracks at Dongdaegu Station.

The 22-year-old driver, who had allegedly been drinking, was transferred to a hospital. His injuries were not life-threatening, according to the police.

The driver, surnamed Park, registered a blood alcohol level of 0.112, double the legal limit of 0.05, when the crash took place at 3:50 a.m. His driver’s license is likely to be revoked.

The vehicle crashed through a guardrail of Daegu’s Shinam-dong, flipped over and landed on the tracks, which it damaged.

Five KTX trains bound for Seoul were delayed for 20 to 30 minutes each. Service was back to normal at 6:30 a.m. Investigators blame the crash on negligence of the driver but are going through CCTV footage to make sure.

The Korea Railroad Corporation, which jointly operates subway lines No. 1, 3 and 4 with Seoul Metro, said that it detected a power supply problem in the first train leaving Geumjeong Station, which was bound for the Government Complex Gwacheon Station, at 5:30 a.m. Services were resumed at about 7:40 a.m.

The technical glitch caused northbound trains to operate on the other side of the tracks for two hours, delaying trains for up to 30 minutes during morning rush hour. Many commuters had to line up to enter stations on line No. 4.

Korail was investigating the cause of the power failure.

“The substation failed to properly provide power,” said an official of Korail who spoke on the condition of anonymity. “We are trying to verify the specific cause, and we are planning to check the power supply to prevent such an accident in the future.”