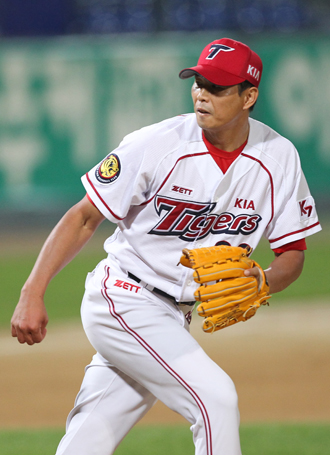 Jim Morris, the Milwaukee Brewers’ fourth pick in the first round of the 1983 amateur draft, was a big-name baseball prospect. But he never became a star player due to a series of injuries. Years later, while working as a coach for a high school baseball team in Texas, he promised his students that he would try out for Major League Baseball if the school team qualified for a regional round. When the team did, he had to keep his promise. After throwing several 95-mile-per-hour (153 kilometer-per-hour) fastballs in a tryout with the Tampa Bay Rays in 1999, he signed with them and debuted that year in a Sept. 18 game against the Texas Rangers at the age of 35.

Now, a Korean baseball player is aiming for the same happy ending.

Choi Hyang-nam, a 43-year-old right-hander, is famous for his never-ending, challenging spirit. His biggest challenge might be yet to come. The Goyang Wonders, an independent baseball club not affiliated with the Korea Baseball Organization, said on Monday that they have signed a deal with Choi. Details of the contract weren’t released.

“The reason I decided to play with the Wonders under Coach Kim Sung-keun’s leadership is because I thought I could improve myself as a pitcher,” Choi told the Korea JoongAng Daily in a phone interview. “I hope I can play on a professional club again sometime.” Choi will join the Wonders for spring training, which begins Friday in Japan.

Choi wasn’t a big-name prospect when he joined the Haitai Tigers in 1990. He pitched only five games as a reliever that year, then joined the military to complete his two-year mandatory duty. He spent four more seasons with the Tigers, but he didn’t pitch much because of injuries and poor performances. He was traded to the LG Twins in November 1996. He had a breakout season in 1998 with the Twins, with a record of 12-12, but lost most of the next five seasons to injuries. He was released in 2003, then joined the Kia Tigers in 2004.

“I think every baseball player dreams of playing in MLB,” Choi said. “And I thought there was not much time left for me, considering my age at the time.”

However, Choi failed to re-sign with the Bisons. He joined the KBO’s Lotte Giants in 2007 and played two seasons instead. Because he didn’t receive any offers from KBO teams after the season, people thought that Choi’s career was over. But in 2009, Choi again headed to the United States and joined the Albuquerque Isotopes, the Triple-A affiliate of the Los Angeles Dodgers, as a reliever, and had an outstanding season with a record of 9-2 and a 2.34 ERA.

“I heard from the coaching staff that I might make a MLB debut in September when the roster was expanded, but that chance was given to a younger player,” Choi recalled. “I understand, because it was part of their business.”

Although Choi was disappointed, he didn’t want to give up. But things didn’t work out, leading the Isotopes to release Choi in July 2010 after his ERA rose to 5.84.

He then played with the KBO’s Giants until the 2011 season, but he wasn’t sharp like he used to be when he was with the Isotopes due to elbow injuries. After being released from the Giants, he chose not to have surgery and spent months in rehab.

On May 22, 2012, when Choi was 41, he joined the Tigers after going through an open tryout and later became the team’s closer. With a save against the Nexen Heroes on July 25, 2012, he became the oldest pitcher in KBO history to save a game.

He played with the Tigers in 2013 and had a record of 2-2, with eight holds and a 4.45 ERA in 26 games. After the season, he told the Tigers that he wouldn’t re-sign with them so he could try out for an MLB team, but no club gave him a chance, leading him to join the Wonders.

“I still think there are many things to learn as a pitcher,” Choi said. “And I considered that coach Kim is the person who can help me become a more competitive pitcher. Some might say I wasted my time in the U.S., but I don’t regret the time that I had in Korea and in the U.S. The time I spent with young baseball prospects in the minor leagues was one of the most precious times in my entire career. I won’t stop dreaming and I won’t stop challenging because I still think I can play in a professional league. I hope I can play on either a KBO team or a Japanese team later.”

Just like former New York Yankee catcher and manager Yogi Berra said: “it ain’t over ‘till it’s over.”