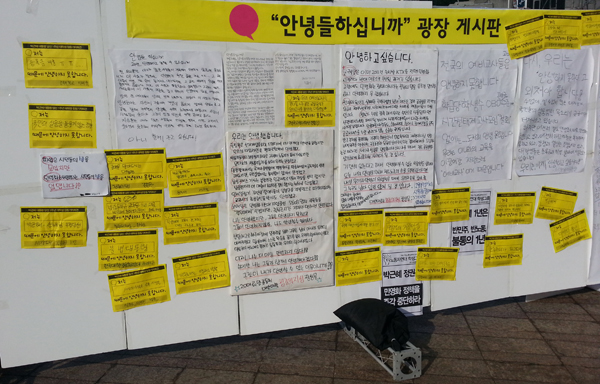 A bulletin board with posters bearing the slogan “Are you okay?” was set up at Seoul Plaza by college students. [JoongAng Ilbo]

I’m currently at home, enjoying what remains of my Christmas holiday in Manchester, England. Since I left Seoul three weeks ago, the “Are you okay?” poster movement has become all the rage. As a journalist (well, an ex-journalist), I was disappointed to miss it. But from my current vantage point, it makes me think that Korea may now be starting to become a little more like my own country.

One of the things that struck me when I first visited Korea was the people’s sense of positivity and lack of cynicism. People seemed to value unity, and not just during the World Cup. Sarcasm and even satire were in low supply. Being the son of a country that has graduated even from modernity to a kind of atomized, been-there-done-that negativity, this was all quite refreshing. I naturally questioned authority of any kind. Whenever a celebrity, politician or wealthy businessperson said they wanted to do something for society, I asked, “What’s in it for him?”

But maybe I was wrong: Korea seemed to be a place where things got done, and where people care about others.

Though Korea has long been politically, geographically and economically divided, those divides created a sort of Hegelian force to drive things forward, regardless of how much the participants hated each other. Both sides seemed to want the best for the country. But now in 2014, there is no dynamism to the divide. And the young are finally learning to be completely cynical about politics, business and big organizations in general.

As a society progresses deeper into modernity and beyond, cynicism rises while growth rates tend to fall. This arguably leads to selfish behaviors, like rent-seeking; witness the political lobbying industry in the United States, for instance. But on top of that, people in industrialized countries are now entering an era of insecurity. Capital can now move to wherever it is most productive. In economic terms, this is highly efficient. But workers in wealthier countries pay a heavy price for that efficiency. If you do not possess specialized, irreplaceable, constantly in-demand skills, you will be lucky to have a long and stable career. The threat remains when “the economy” is motoring ahead - causing stress to the individual, and threatening social unity and trust.

The politically minded can debate whether governments should intervene to protect citizens in the era of globalism. But for the average worker, such discussion seems pointless. Do governments want to intervene? And are they able to, even when they want to? One very successful businessman recently told me that the impact of government and regulation on him is almost zero. And in both the United Kingdom and Korea, the trend toward job insecurity and inequality has continued among “progressive” and “conservative” governments alike. Sometimes older Koreans like to tell me that former President Roh Moo-hyun was a Communist. I like to reply that if he was, he clearly wasn’t very good at it.

A recent U.K. survey showed that only 16 percent of people respect politicians, and a mere 2 percent feel inspired by them. Almost half said their main reaction to politicians was “anger.” A majority of young British people don’t even care about elections. The biggest political debate last year in the United Kingdom, set off by the comments of comedian Russell Brand, was over whether it was pointless to bother to vote. Those in their 20s will simply tell you that voting changes nothing. But they aren’t becoming radicalized, or turning to the left. In fact, British twentysomethings are moving toward economic neoliberalism.

They don’t have conservative ideology, though. They are pro-gay marriage and pro-drug legalization. They reject nationalism and dislike traditions and institutions. What they are is libertarian, as a result of cynicism - they don’t like anything government does. They don’t like spending, be it on welfare or war. I think we’re already seeing the emergence of this kind of young person in Korea as well.

Assuming politics remains as it is, I imagine future generations will end up with two economic options. The first will be to embrace insecurity, by either becoming an entrepreneur or simply rejecting the traditional notion of the “job,” for instance by becoming a “brand” and one-man company, with specialized skills and multiple income sources. And the second will be to form collectives - not businesses or political groups - but cooperative societies that reassert the existence of community and allow people to defend themselves and prosper in an insecure world. I’m planning to live my own economic life around these two choices.

We are going through a period of cynicism and self-centeredness. This is especially true for young people. I am reminded of this every time I log onto Facebook and see an endless parade of links to negative news articles. But I hope it will come back eventually. It won’t come from politics, though. It will come from the bottom up, from the community.

*The author is a former Seoul correspondent for The Economist.