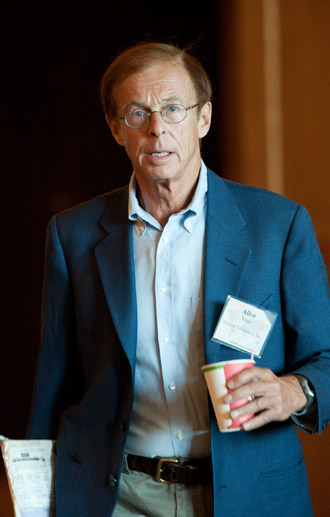 American economist Allen Sinai, president of Decision Economics, predicts the Korean economy will grow 3.5 percent this year and advises businesses to cut costs in response to the weak Japanese yen.

At a lecture hosted by the Institute for Global Economics in Seoul yesterday, Sinai made a toast with a “half-full glass of wine.” Until last year, he used “half-empty” to symbolize economically tough times.

“For all four pillars of the global economy ? the United States, Europe, China and Japan ? the outlook is optimistic through 2015,” Sinai said. “Japan is back in the game.”

Sinai is widely known for his accurate economic forecasts that incorporate both dates and data.

A year ago in Seoul, Sinai projected the U.S. dollar would surpass 100 yen.

Yesterday, he said the yen-dollar rate will climb to 110 to 115 within five months.

“Korea should remember the won will keep strengthening against the yen,” Sinai said. “If Japan gets its economic growth above zero through trade, Korea and other Asian economies will benefit from it, and this will help the global economy achieve solid growth.”

China has pretty much succeeded in making a soft landing, he said, and it will pick up again. For the next five years, the United States and other economies will expand, he added.

Despite his negative outlook on Washington’s political schisms, Sinai upgraded his forecast for U.S. growth from 2.3 percent to 2.8 percent. U.S. consumer spending will go up 2 percent to 2.5 percent, a positive for Korea’s exports, he said.

“Korean manufacturers will have to think about cutting costs and improving quality in preparation for possible declining price competitiveness, being fully aware of the weakening yen,” he said.

To the question of possible cuts in the benchmark interest rate, Sinai said, “There is room for the Bank of Korea to do that to achieve its 2.5-percent inflation target, because the inflation rate is low and the won is strong.”

If the recovery solidifies, the U.S. Federal Reserve might consider raising its key interest rate in the fourth quarter at the earliest, he projected.

The average global key interest rate might be around 3.7 percent by 2015.

Sinai described the Korean government’s goal to boost private consumption by 3.3 percent this year, as “good, but too ambitious.”

“If it really wants to boost the domestic market, it should reduce tax rates,” he said.