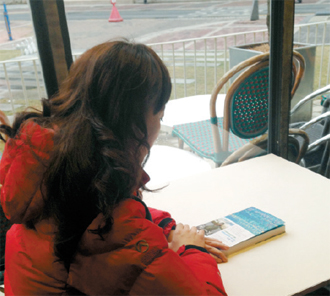 Jang Mi-jeong, the woman whose arrest and imprisonment for cocaine smuggling in 2004 was the basis for the recently released film “The Way Back Home,” recently released a book titled “Lost Days,” detailing her views of the incident and its aftermath. Jang requested her photo to be taken from behind to conceal her identity and to protect her daughters. [JoongAng Ilbo]

Even when based on real-life events, movies inevitably change reality.

In “The Way Back Home,” Jeon Do-yeon’s character returns safely to Korea after having spent years in a French prison for drug trafficking. The story has a happy ending - the protagonist is eventually reunited with her husband and daughter.

But the real story is quite different and didn’t have such a cheerful finish.

On Oct. 30, 2004, Jang Mi-jeong was arrested at Orly Airport in France for smuggling a suitcase filled with 17 kilograms, or 37 pounds, of cocaine. Jang said she had no idea what it contained. She had been given a bag by her husband’s old friend and was told it was filled with unpolished gemstones. Jang had agreed to carry the suitcase from Guyana to the Netherlands via France in return for 4 million won, or about $3,740 today.

After getting caught at Orly, Jang was jailed near Paris for three months awaiting trial. Then, after being found guilty, she was sent to a prison in French-administered Martinique in the Caribbean, across the world from her family and forgotten by the Korean government. She finally returned to Korea two years later on Nov. 18, 2006.

It has been more than seven years since Jang, now 45, returned to Korea. To reveal what really happened to her seven years ago and how her life has changed because of the incident, Jang recently released a book titled “Lost Days.” The story she tells is similar to the recently released film “The Way Back Home,” starring Ko Soo as her husband. But while the film focuses on the incident, the book talks more about Jang’s life after returning from prison.

“The movie is the story of a made-up character named Song Jeong-yeon, played by actress Jeon Do-yeon,” said Jang. “I wanted to talk about my own story with my own voice.”

The book deals with Jang’s life in more detail than the film. The troubles she went through when she first came back to Korea, which are not described in the film, are included in the book.

“I imagined that when I came back to Korea, I could dance around the streets for joy,” said Jang. “But in reality, I couldn’t. I couldn’t even meet people. There was nothing I could do.”

Traumatized by her ordeal, Jang ate too much and could not leave her apartment. Having gotten hooked on sleeping pills in prison, she found she could not fall asleep easily without them. Unable to cope with life, she eventually had to send her daughters to her sister-in-law’s home again.

“It took a long time for me to adjust to Korean society again,” said Jang. Above all, Jang said the hardest part of returning was the cold stares people gave her and the suffering her two daughters went through. They were ostracized at school, as no one wanted their daughters to hang out with the girls whose “mother had been in prison.”

“I didn’t want my daughters to hear about me from others,” said Jang. “I wanted to tell them what really happened and how it happened. That’s one of the reasons why I wrote a book.”

Jang was also concerned that rummaging through old memories again would invite other misunderstandings.

“There are people who say I shouldn’t blame my country when it was me who committed the crime in the first place,” said Jang. “I’m not saying that I was right. Not all people who are poor commit crimes, but I couldn’t resist the temptation of 4 million won. I deeply regret what I did, and I’ve served my time. It’s just that I could have come back earlier.”

Jang says it still hurts when she recalls the incident, but she doesn’t try to ignore it. It took 10 years to take the sting from her heart, she said.