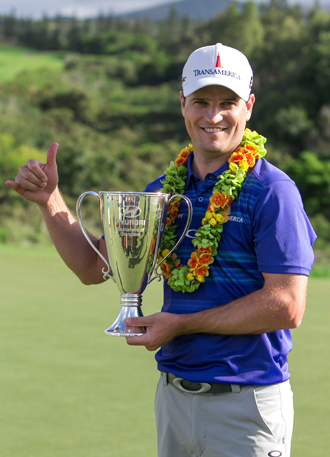 Zach Johnson’s short game skills were on full display as the American fired a bogey-free seven-under-par 66 to grab a one-stroke victory at the $5.7 million Hyundai Tournament of Champions on Monday.

Johnson, who started the final round two shots off the pace, took the sole lead with a short birdie putt on the 14th hole and also birdied the next two holes to pull away at the Kapalua Plantation Course. The 2007 Masters champion finished at 19-under 273, while fellow American Jordan Spieth (69) birdied the last to finish second at 18-under, with compatriots Kevin Streelman (67) and Webb Simpson (70) another shot back tied for third.

Johnson, 37, collected $1.14 million for his 11th PGA Tour victory but was subdued afterward, his focus on Simpson’s regular caddie, Paul Tesori, whose newborn son is in intensive care in a Florida hospital.

“That’s where my heart was today and that’s where my mind was a lot of the day,” Johnson told the Golf Channel. The world No. 9 is renowned for his wedge game, which he demonstrated by chipping in from 45 feet at the par-three second as joint overnight leader and defending champion Dustin Johnson (73) fell away with three early bogeys.

Zach Johnson then continued his good work with a series of precise approach shots on the back nine.

“I didn’t deviate away from anything I typically do on the golf course,” he said.

“I just picked it apart. It’s fairways and greens for me, trying to stay below the hole, give myself an aggressive look, trusting in what I’m doing.”
He made seven birdies, but it was a par save at the par-four 13th that perhaps was the turning point. After hitting his first putt far too hard, he sank an eight-footer to remain tied for the lead before holing a similar-length putt at the next hole to go ahead for good.

Comfortable under pressure, he briefly sat to admire the panoramic view of the island of nearby Molokai after his tee shot at 17 before recording two pars to seal a second straight victory. Johnson ended last year by beating Tiger Woods in a playoff at the world No. 1’s World Challenge in California. Reuters