Don’t forget about those non-blue-chip funds

Don’t forget about those non-blue-chip funds 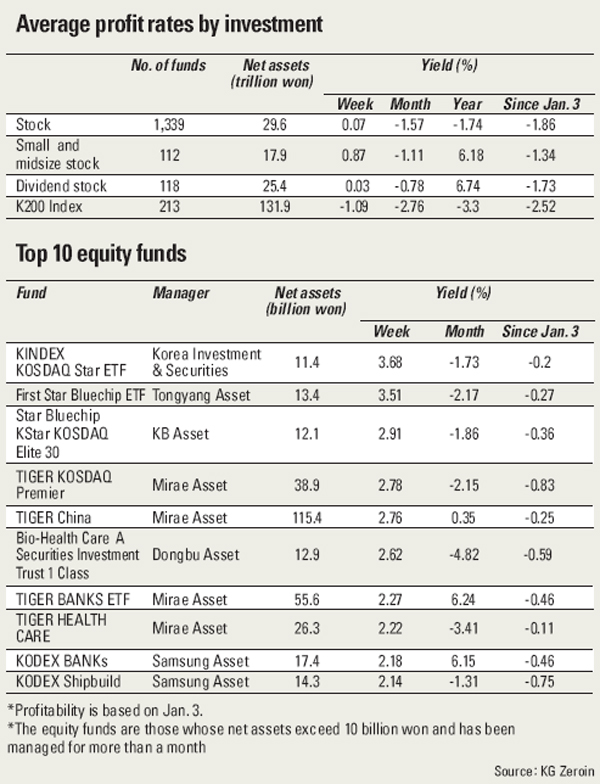 The first two trading days of the year were horrible for investors across the board, especially those who have their money stashed in major stocks such as Samsung Electronics and Hyundai Motor.

As a result, equity funds saw their weekly yield drop 0.42 percent as of Friday, according to a recent study by KG Zeroin, which specializes in evaluating funds. The decline was the first in three weeks and largely due to the performance of stocks with large market capitalization, like those in the K200 Index Fund, which invests mostly in blue chips. They showed the biggest decline last week compared to other investments, dropping 1.09 percent.

Unlike the struggling blue chips, funds investing in shares of small and midsize companies saw relative growth, adding 0.78 percent to their weekly yield.

This is a turnaround from last year, when blue chips in the latter half received all the attention with increasing returns, and smaller cap funds were ignored. This all changed when foreign investors started to increase investment in small caps at the end of the year.

The study showed the bio industry and smart-related technologies such as pharmaceuticals, the Internet, telecommunications and software stocks were doing well. High hopes for additional policy support from the government for small and midsize companies further boosted the value of their stocks.

This study shows that the tech-heavy Kosdaq may get more attention from investors.

Because President Park Geun-hye during her first press conference of the year on Monday mentioned stronger support for the establishment of an “innovative” economy backed by start-ups, more investments are expected to roll in.

Last week, out of the 1,486 equity funds managed for more than a month with net assets of more than 10 billion won, 41.5 percent, or 617, grew compared to the previous week.

Of the total, 95 percent, or 1,420, saw even better performance than the Kospi index.

On the other hand, funds that invest in the Kospi index, including Hanwha 2.2 X Leverage Index, saw a nearly 4 percent decline in weekly yield.

Bond funds didn’t do too well, either, especially as foreigners and institutional investors pulled out.

Foreigners at the end of the week started to realize their profits, which caused the bond fund weekly yield to retreat. Most of the local bond interest rates rose, with three-year treasuries gaining 3.1 base points to close the week at 2.91 percent, while five-year and 10-year bonds added 8 basis points and 10.5 basis points to close at 3.3 percent and 3.68 percent.

Among the 137 bond funds in the local market, only 37, or 27 percent, saw weekly yields increase.

The higher-yield bond funds were mostly concentrated among those of short duration. The IBK Grand Prix Short-Term Bond saw the highest weekly yield of 0.07 percent.

Yearly yield rates on funds that invested in overseas markets averaged a 4.16 percent increase. This was a stark contrast to the 1.23 percent for funds investing in the local market.

Funds invested in Japan saw the highest return at 45.31 percent, followed by North America with 33.22 percent. Europe trailed at 20.31 percent.

Although the Nikkei 225 slightly dipped yesterday, 2013 was an exciting year and many market experts expect the bullish rally to continue throughout 2014 on the back of aggressive monetary and fiscal stimulus pushed by the Shinzo Abe administration since late 2012.

The Nikkei 225 rose 56 percent last year, the biggest surge the Tokyo market has seen in four decades. The situation was the same for the U.S. market, where the S&P 500 was up 29 percent during the same period.

Investments made in China saw only mild growth of nearly 5 percent, while investing in Southeast Asia resulted in a 1.73 percent decline. Funds that invested in India saw a sharper drop of 6.28 percent. The situation is even worse for South America. Equity funds that invested in emerging South American economies averaged returns of minus 14.54 percent, while equity funds in Brazil posted a minus 20 percent yield.