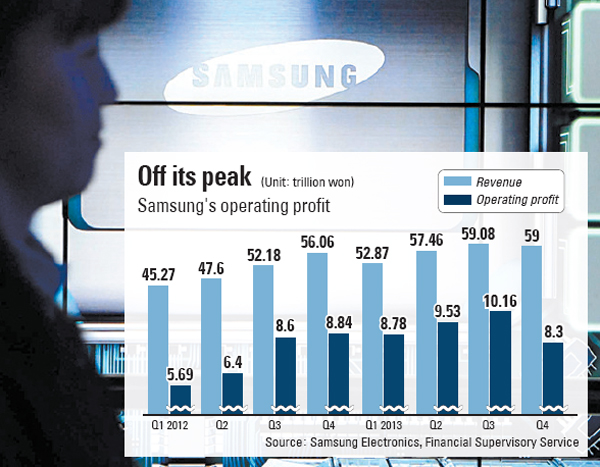 Disappointment in the earnings of Samsung Electronics, which accounts for 20 percent of Korea’s stock market capitalization, wasn’t totally unexpected. But the scale of the decline was a surprise, and the company’s shares dropped 0.23 percent from the previous day.

The company announced yesterday that while sales rose 5 percent to 59 trillion won ($55 billion) in the final three months of 2013, its operating profit was 8.3 trillion won, down 6 percent from a year earlier.

Since the fourth quarter of 2011, the operating income of the world’s largest smartphone maker has increased every quarter, peaking at 10.16 trillion won in the July-September period of last year.

The profit result for the fourth quarter was far lower than even the most conservative forecast and an 18 percent decline from the third quarter.

However, most local securities firms said one-off factors would not affect the fourth-quarter profit.

But the result reflected more serious issues such as the declining profitability of the company’s cash-cow smartphone sales, implying that explosive growth in Samsung’s lucrative mobile-device business is screeching to a halt.

A deterioration in the performance of the mobile sector, which accounts for more than half of Samsung Electronic’s total sales, is cited as the most likely cause for the poor profit.

Samsung’s power as the market leader had been weakened as Sony, LG and HTC released impressive smartphones that can compete with Samsung’s Galaxy S4.

“It is expected that the margins of IT and mobile business sectors have reduced significantly,” said Park Hyun, research fellow at Tongyang Securities.

“It also seems that the cost of research and development for new products in the display sector was burdensome.”

Samsung Electronics said the sag in the fourth-quarter operating profit was not due to weakening competitiveness in its flagship business, but a temporary slowdown caused by short-term causes and one-time costs such as handing out bonuses to employees to commemorate the 20th anniversary of Chairman Lee Kun-hee’s “New Management” strategy.

“There won’t be such costs for one-time events and marketing costs are also expected to decline compared to the fourth quarter last year, so an improvement in earnings is likely to be achieved,” said a spokesman for Samsung Electronics.

According to industry sources, Samsung’s New Management-related bonuses and incentives, marking 20 years since its chairman set it on the road to becoming a global behemoth, are expected to reach up to 800 billion won.

The foreign press suggested that the sluggish performance resulted from a saturated smartphone market and excessive competition.

As sales of Samsung smartphones through last year’s third quarter were 233.8 million, it can be estimated that it sold around 95 million smartphones in the fourth quarter.

That is more than the 88.4 million smartphones sold in the third quarter. But the profit decline suggests a higher proportion of sales of low-end products, while marketing costs due to the stronger competition with Apple have expanded, analysts said.

Some analysts estimate operating profit in the mid-5 trillion won range for the mobile business in the fourth quarter.

When compared to the 6.7 trillion won profit for the third quarter, that’s a reduction of up to 20 percent.

A worsening performance in the display sector was another factor.

On the other hand, operating income for semiconductors is estimated to have reached up to the mid-2 trillion won range, while profit for TVs and home appliances rose to 500 billion won.

Profit on semiconductors is expected to have risen 10 percent thanks to a sales boost in memory chips.

“For the TV business, we saw the highest performance both in sales and profits on a quarterly basis,” said a spokesman for Samsung.

Analysts also pointed out that the strong local currency against the dollar and the weak yen contributed to Samsung Electronics’ deterioration of earnings. Due to the strong won, the average exchange rate for the fourth quarter fell more than 4 percent compared to the previous quarter.

Despite a disappointing fourth quarter, the overall performance of Samsung Electronics for 2013 was not bad. Sales increased 13.5 percent to 228.42 trillion won and operating profit gained 26.57 percent to 36.77 trillion won.

However, as growth in the mobile business slows and China’s role in the semiconductor and display sector rises, achieving record profits for each quarter will be difficult.

Analysts say that if Samsung does not come up with an alternative to the mobile business for the future, the weakness in its share price may continue over the long term as consumer electronic sectors such as TVs and home appliances tend to earn less profit.