Shinsegae will invest and hire to boost local market

Shinsegae will invest and hire to boost local market 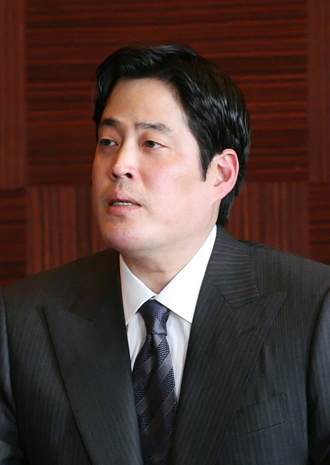 And to do that, Shinsegae Group said yesterday it will invest an average of 3.1 trillion won ($2.9 billion) every year for 10 years and hire 17,000 employees over the same period.

Shinsegae Group announced the blueprint of its investment and hiring plans yesterday, a day after its executives, including Vice Chairman Chung Yong-jin, met for a management strategy workshop.

This year, the retail conglomerate decided to invest 2.6 trillion won, which is it largest amount to date, and hire 12,000 new workers.

Based on its 10-year investment and hiring plan, Shinsegae Group will have invested 31.4 trillion won by 2023, taking on 170,000 new workers in the process.

“Our plans are based on the aim that we should contribute to boosting the domestic economy,” said an official from the group.

While the global economy is showing signs of an improvement from the financial crisis triggered by the collapse of Lehman Brothers in 2008, it remains to be seen if that recovery will be robust enough to be felt in the domestic market and lead to increased consumer spending.

In fact, according to the Bank of Korea, the overall consumer sentiment index in December was unchanged from November at 107.

In particular, the index for the consumer spending outlook in December was 109, down 1 percentage point from the previous month, and the index dropped 2 percentage points to 96 over the same period when it came to how consumers view the future economic outlook.

A reading above 100 indicates that a majority of respondents are optimistic about the economic outlook, while a reading below 100 indicates otherwise. 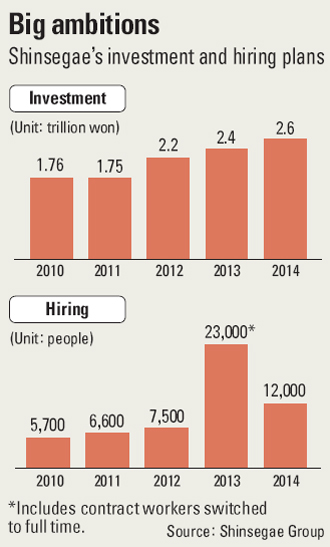 Shinsegae Group plans on overcoming the sag in the domestic market by investing more money and hiring more people.

As for this year, most of its investment will be dedicated to building shopping malls in regional areas, including one in Hanam, Gyeonggi, and another in Samsong District, Goyang.

Also, of the 170,000 new workers it will hire, the conglomerate’s department stores and discount stores will hire 73,000, while the rest will be hired by different businesses and brands.

“If needed, we plan to expand our investment and hiring plans even more based on future economic conditions to contribute to stabilizing the domestic economy,” Vice Chairman Chung said.

Chung also talked about “innovation” to his employees. Innovation has been a key word for the Park Geun-hye administration, which is championing a more creative economy.

“In the next 10 years, we plan to secure our future growth by investing more and finding new business conditions for the retail sector,” Chung said. “And innovation will lead us to do that.”