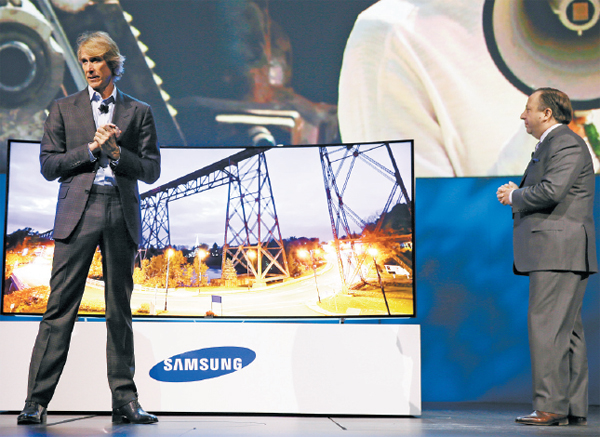 Samsung and LG are facing off with their specialty televisions on one of the world’s biggest stages: the 2014 International Consumer Electronics Show, which began in Las Vegas on Monday, local time.

The main competition emerged around not just superiority of the display itself, but convergence with various smart devices.

Samsung Electronics rolled out its UHD TVs in sizes of 55 inches to 105 inches for curved screens and 50 inches to 110 inches for flat screens. Its 105- and 110-inch models are the world’s largest UHD TVs.

When asked if Samsung will roll out any lower-end UHD TVs, Yoon said the company is preparing differentiated line-ups tailored to the needs of consumers, which are unique in each market.

Samsung also revealed an 85-inch bendable UHD TV, which wowed the audience with its remote control that enables viewers to adjust the screen’s curve angles.

Yoon explained that the angle of screen curve and picture quality are the two most significant factors in determining the excellence of a UHD TV. When watching a video, a television with optimized curves displays deeper movements and more intense moods than flat TVs.

In a separate interview, Yoon added that the bendable TV is technologically mature enough to be commercialized, but Samsung will roll it out after its UHD TVs.

Meanwhile, LG Electronics unveiled the world’s first flexible OLED TV, whose display can be curved or flat and adjusted by remote control. The introduced model was 77 inches.

Han Sang-beom, CEO of LG Display, said the company will take more time to commercialize the flexible OLED TV to perfect the quality and may produce it in larger sizes.

When asked about LG’s introduction of the flexible TV with OLED display while the TV market is currently interested in UHD display, Han said LG is making efforts to enhance both kinds of displays.

“As I mentioned last year, it will take time for OLED to become a market trend. It is true the UHD TV, an upgraded kind from existing LCDs with enhanced resolution, is produced in different sizes due to increasing market demand. However, OLED is an entirely different kind of display,” Han said. “I think we will have about two years until UHD is completely developed and part of the major TV market. We will push our OLED TVs by 2016 to make the quality as high as possible.”

Samsung hopes to sell 50 million to 60 million UHD TVs this year, while LG estimates it will sell 13 million units.

As the super clear TV market seems to keep expanding and diversifying, Han predicted that manufacturers will compete against each other with premium models that will therefore sell better than lower-end models.

Samsung and LG also introduced smart TVs and suggested examples of technical convergences connecting the smart TV and other appliances.

Yoon, head of Samsung Electronics’ consumer electronics department, was confident Samsung already holds an advantageous position as the company has better technologies and infrastructure for manufacturing parts for electronic products, such as semiconductors and displays.

He introduced the Samsung Smart Home service, a convergence platform that integrates a smart TV, home appliances and other mobile devices. He was confident the consumer electronics products will satisfy the users by offering customized information and services.

LG acquired the operating system from HP in March and adapted it to a smart TV.

The company takes pride in maximizing user experience by simplifying the search and switching functions and easier convergence with other devices.