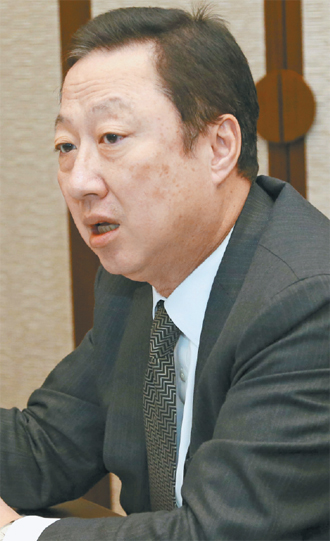 Park Yong-maan, Chairman of the Korea Chamber of Commerce and Industry

Last year was a tough one for big businesses in Korea. With President Park Geun-hye pushing for “economic democratization,” the emphasis was on leveling the playing field between large and small companies.

For many, that basically meant holding down big businesses, even though several large enterprises said they had made an effort to change in ways that would help society.

Park Yong-maan, chairman of the Korea Chamber of Commerce and Industry, still feels bitter when he thinks about this.

“[Big] businesses are not resisting requests for change,” the 59-year-old said in an interview with the JoongAng Ilbo, just before New Year. “It’s too much to condemn companies as a group for being reluctant to change and having bad intentions.”

But Park also feels confident that change will come.

“Businesses will transform more quickly than any other [group],” he said, assuring that “after a few years, people will say ‘Companies have advanced so much .?.?. What are other groups [in society] doing?’?”

Q. Why does there seem to be hostility in society toward big companies?

A. Over time, companies have done their best to enhance [Korea’s] economic status. The whole country has, in fact, placed a priority on this, to improve people’s lives. That left no room for businesses to look after internal development. What I’m trying to say is, people need to understand the [circumstances]. I’m not saying that we did something right. Now, it’s not only companies that are suffering but society as a whole. Companies are changing.

That is somewhat necessary to protect small and midsize companies. But if that becomes everything, then the results are so obvious that the competitiveness [of SMEs] will deteriorate. When protecting small businesses there should be a clear consensus that, after several years of that protection, those protections will be withdrawn. So, over that period of time, small companies should work hard to boost their competitiveness. If [the government] extends only protections for small companies then it won’t help them and it’s just more politics.

There was some disorder in society recently caused by the strike by the Korea Railroad Corporation labor union. What is your view on social conflicts in the country?

The precondition for compromise and concessions is to discuss a conflict as a whole. If there are 10 bulletpoints to an issue, then we need to look into the 10 points together. It was the case that for the controversy surrounding Korail, six of the 10 issues were not even being touched upon [at the negotiating table], but both sides [the labor and management of Korail] each took two points as the grounds for their arguments.

How would you forecast this year’s economy?

I’m not worried about the United States tapering its quantitative easing program. Most of what we export are intermediary products that go through emerging countries and then to developed countries. With the recovery in the economy of advanced nations, Korea’s exports will grow at a moderate level. I would say that domestic investment is somewhat in a surplus condition. The environment of Korea for businesses is not good for investing because of various regulations and labor-management relations. Investment is not a problem of will but of opportunity. I would expect overseas investment to grow before domestic investment. There’s also a lack of financial resources. The exit from the economic slowdown should boost domestic consumption. In particular, the service industry is very important.

Low economic growth is another concern.

When looking at countries with GDPs of more than $20,000 per capita, economic growth in the high 3 percent range is fair. We should change the way we think about growth. We’re no longer living in an era where the spirit of companies that start from scratch is recognized. Rather, we need a more advanced business spirit where companies innovate and combine with others. There should also be a spirit where businesses accept what they have not tried before. It’s not right to define today’s growth based on past thoughts.

What are your thoughts on the “creative economy”?

It’s the right direction. The economy should flow from one that is led by the manufacturing sector to one that’s driven by innovation. There are some that criticize the government and ask it to come up with an exact concept and definition of creative economy, but that would mean the state is leading the creative economy, which would be something of a contradiction.

There are also businesses concerned over the court’s recent ruling on employee bonuses being included in base salaries. What is your opinion on that?

To be honest, I’m not sure what to say having just heard about the Supreme Court’s ruling. It will take time to sort things out after each of the individual rulings comes. Seeing that we’ve come this far, though, the country’s wage system should be clarified by law so that there is no more controversy.

Are you happy being rich? (Park is also chairman of Doosan Group.)

It’s true that having lots of money is comfortable. If I don’t acknowledge that fact, then I’m a bad guy. But what it takes to be happy is different. Happiness comes not from events like a promotion or acceptance [into a company or university], but from everyday life.

Do rich people like you think about what happiness truly is?

Why would I not have thought of passing my property on to my children? I desire that as well. But if parents let their children take that money for granted, then happiness doesn’t last long. Even if you’re rich, you don’t want to have a bad relationship with your spouse or your children.