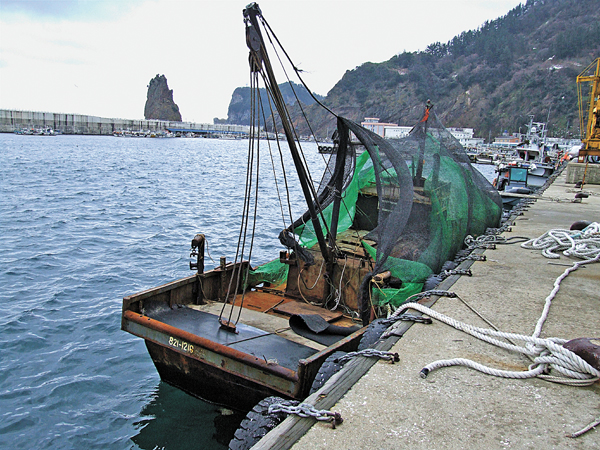 A North Korean fishing boat is docked at a port in Ulleung Island, a far eastern island of South Korea, after it was found drifting in South Korean waters on Jan. 3. Provided by the Kyongbuk Ilbo

A North Korean fishing vessel had drifted for nearly a month in the water before it was discovered by the South Korean Navy. During that time, the four men on board continued to fish in order to survive despite their deviation from course and the cold weather.

The South Korean Navy detected and rescued the North Korean boat on Dec. 30 in the Southern territory near Ulleung Island, the far eastern island of the country. The crew said they had been stranded at sea for about a month and had not returned home since.

Korean officials speculate that the incident was perhaps the result of efforts to heed recent calls by Kim Jong-un, the North’s young leader, for an increase in the volume of fish supply.

“Kim Jong-un’s recent emphasis on the fisheries industry is probably an attempt to raise the volume of fish caught to help resolve food shortages at home,” an official at the Ministry of Defense said.

A South Korean government official told the JoongAng Ilbo that the four North Korean crewmen said they had departed from the North Korean port city of Sinpo in North Hamgyong Province in early December.

“They said they were supposed to immediately return home after working near the coastal area of the city, so they did not have sufficient food and fuel.

“But immediately after their departure, some of the vessel’s equipment broke down,” the official continued. “Despite a lack of food, they drifted toward the South but continued to catch fish to sustain themselves.”

The official said the crews asked the South Korean military to return them to North Korea immediately. They were repatriated on Dec. 31, a day after their rescue, beyond the Northern Limit Line (NLL) in the East Sea, a de facto maritime border with North Korea.

“Because they were sent back to North Korea a day after the rescue, we did not have enough time to ask them how they were able to survive on the boat for that time,” the official said.

South Korean officials say it is unusual for a series of North Korean fishing boats to drift over inter-Korean maritime borders in the winter, when the regime’s fishing activities tend to decrease.

However, the officials said it seems likely that drifts have become more common because the North’s boats are too weathered to handle the task.

“North Korea has recently expanded its fisheries activities in the East Sea,” another official in Seoul said. “Given the fact that Kim Jong-un has emphasized the importance of the fishing industry since last summer, we assume that the regime urged fishermen to increase fishing.

“However, despite the leader’s calls to boost fisheries, most North Korean boats are so outdated and old that it leads to frequent breakdowns and drifts,” the official said.

“There was no crew on the boat when we found it,” a South Korean military official said. “The Coast Guard towed [the vessel] to a local port in Ulleung Island.

“After an investigation, we confirmed that the boat was not intended for espionage against South Korea,” the official added. “We believe the ship broke down and the crew may have already fled to other ships or died while drifting.”

Under inter-Korean laws, a vessel captured without a crew does not have to be returned. The South Korean military is currently discussing how to handle the vacant ship.