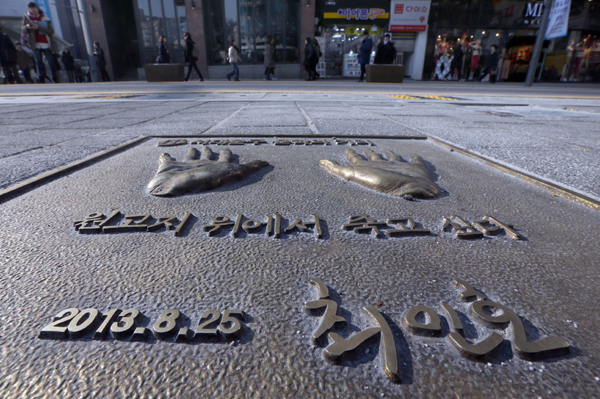 A hand print of the late novelist Choi In-ho is seen along Yonsei-ro in Sinchon, which opened Monday after an ambitious renovation. By Kim Sang-seon

Yonsei-ro, the thoroughfare that stretches from Sinchon Station to the main gate of Yonsei University in western Seoul, served in the 1960s and ’70s as an enclave for aspiring authors and artists.

Its small pubs and dilapidated restaurants were places where intellectuals sought refuge to discuss high-minded subjects during the tumultuous and repressive era of Park Chung Hee. At the center of the literary group was the late Choi In-ho, a prominent novelist who majored in English literature at Yonsei University and lived in Bukahyeon-dong near the university.

“Choi lived near the school and I attended Hongik University,” said Lee Jang-ho, a 69 year-old film director and a friend of Choi who directed a film based on one of Choi’s books. “The two schools were close and we met almost every day. We used to guzzle booze together at a popular pub called The Rose Forest.”

“In-ho really liked drinking at the pub,” he continued. “Sinchon always evokes some kind of nostalgia and it sometimes feels like my hometown because of all the memories from my college days.”

But the area has lost ground to the more up-market streets around Hongik University and in Itaewon because large franchise restaurants, cafes and street vendors dominate the Sinchon area. Yonsei-ro became kind of pokey and the artsy atmosphere that once defined it had largely faded.

Yonsei-ro may be on the rebound after an ambitious makeover. It’s hoped that the road’s new designation as a public transit zone, which bans private vehicles, will breathe new life into the area. The road, about 550 meters (1,804 feet) long, underwent renovation to be shrunk down to two lanes. The sidewalks were then greatly expanded, doubling in size and remodeled to better accommodate pedestrians.

It is the first street in Seoul to ban private cars. Its two lanes are now exclusively for buses. Those with a vested interest hope the effort will help the area reclaim its previous glory.

At an opening ceremony on Monday, a hand print from Choi and 14 other authors were displayed on a large wall along the avenue. The Seodaemun District Office announced in April that it would rearrange the road in such a way that recreates the previous atmosphere, encouraging the establishment of small theaters and rock cafes.

The officials made the hand print after Chio died last year.

Other featured include poets Chung Ho-seung, Yun Dong-ju and author Do Jong-hwan.

But despite good intentions, restoring the area’s lost charm is something of an uphill battle. There were 730 shops up for sale between August 2010 and August 2013 - three times higher than in areas like Myeong-dong, Hongik University and the Gangnam Station neighborhood.

The district office’s initiative owes a lot to the authors and artists who spent formative times in the area. In November, 40 people involved in the literary and cultural scenes launched a panel to discuss ways to revitalize Sinchon.

They brought different ideas to the table, from building a performance center to supporting culture-related organizations.