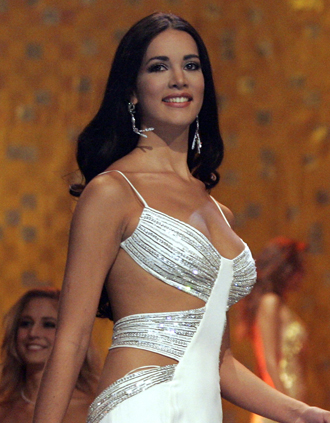 In this May 31, 2005 file photo, Monica Spear competes at the Miss Universe competition in Bangkok, Thailand. She and her ex-husband were killed Monday near Puerto Cabello, Venezuela’s main port. [AP/NEWSIS]

CARACAS, Venezuela - A former Miss Venezuela and her ex-husband were shot and killed and their 5-year-old daughter wounded when they resisted robbers by locking themselves inside their car after tire punctures disabled it on an isolated stretch of highway, police said Tuesday.

The slaying of Monica Spear, 29, a popular soap-opera actress, and Thomas Henry Berry, a 39-year-old British citizen, was the latest high-profile crime in a country where killings are common in armed robberies and where rampant kidnapping has ensnared even foreign ambassadors and professional baseball players.

Monday’s killings followed a pattern in Venezuela of late-night assaults carried out by disabling cars with obstacles placed on roadways or by removing sewer covers.

Spear and Berry were slain at about 10:30 p.m. between Puerto Cabello, the country’s main port, and the provincial capital of Valencia. They were returning from vacation to Caracas on a badly maintained stretch of highway that is lightly traveled at that hour.

Their four-door sedan hit “a sharp object that had been placed on the highway,” which punctured at least two of its tires, the director of the country’s investigative police, Jose Gregorio Sierralta, told reporters.

Two tow trucks arrived almost immediately afterward, said Sierralta, and the attack occurred after the car had been lifted onto one of the trucks.

“They fired with viciousness,” President Nicolas Maduro said of the attackers in comments to state TV.

Police in Puerto Cabello arrested five suspects, some under the age of 18, Sierralta added. It could not immediately be determined if Spear and Berry had called the tow trucks, or if any of the drivers were among those arrested for suspected involvement in the killings.

The daughter, Maya, was in stable condition after treatment for a leg wound and was with relatives in Caracas, said Sierralta.

The family had spent New Year’s in the mountains of the western state of Merida then traveled to the plains, said Luis Carlos Dominguez, a longtime friend and former business associate of Berry. He said Berry was raised in Venezuela and ran a travel agency.

“He knew Venezuela a lot better than many Venezuelans,” said Dominguez, describing the slain couple as people “who really loved the country,” had a good relationship despite their divorce and made it a point to vacation together.

“They weren’t together,” he said. “But they were very attached for the benefit of their daughter.”

He said Venezuelans can only hope that their deaths bring “a bit more strength to the fight against crime.”

Violent crime soared during the 14-year rule of Hugo Chavez, who died of cancer last March. Venezuelans list crime as their most pressing worry.

The country has one of the world’s highest murder rates - the United Nations has ranked it fifth globally - and violent crime is so rampant that Venezuelans tend to stay home after dark.

Spear’s death triggered a wave of anger on social media directed at the government’s poor record on crime.

Opposition leader Henrique Capriles called on Maduro to put aside political differences and unite “to win the fight against insecurity” that claimed nearly 25,000 lives last year. “It’s an emergency.”

In response to the killings, Maduro announced that he would convene a security meeting on Wednesday that had originally been scheduled for the end of January. The meeting will bring together state governors and mayors of Venezuela’s 79 most dangerous cities.

Spear was crowned Miss Venezuela in 2004, was fifth runner-up in the Miss Universe pageant the following year and had acted in numerous soap operas, most recently in “Pasion Prohibida” for the U.S.-based Telemundo network.

She split her time between Caracas and south Florida, said Dominguez, while the England-born Berry lived in Caracas.

Spear had more than 355,000 followers on Twitter and her feed over the last week included brief videos of vacation scenes sent on the popular Instagram service.

In one video, posted Sunday and described as being taken on the plains of Apure state, Spear looks at the camera while riding a horse, turns away and then looks back, blowing a kiss. AP